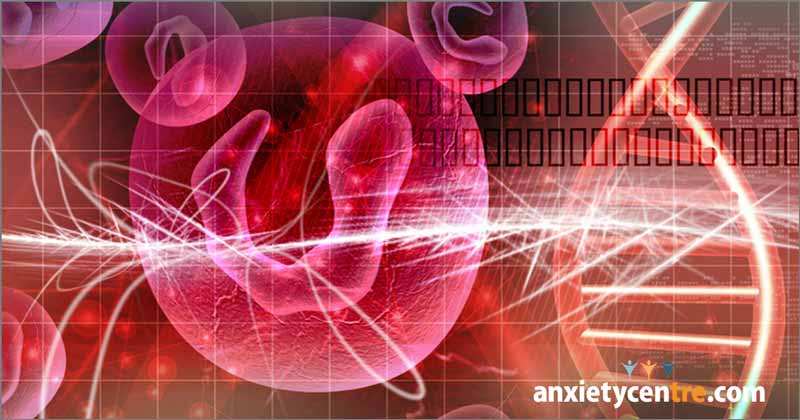 Another common belief is that anxiety disorder and its symptoms are caused by a genetic predisposition.

This observation led to the conclusion that anxiety disorder must be genetically linked.

Is this conclusion accurate?

It’s well established that anxiety disorders run in families.[1] But is the reason genetic or something else?

Even though the study of genetics is well underway, we’re still in its infancy with a great deal yet to learn.

For instance, it was previously thought that genes determined many aspects of our lives and that our destinies were “hard-wired” to the genes we inherited.

But that’s not what researchers found. It was discovered that behavior and environment played a major role in how genes expressed.[2]

This discovery led to the study of epigenetics – the study of changes in organisms caused by modification of gene expression rather than alteration of the genetic code itself.

Even after years of genetic research, as of yet, there is still no “anxiety gene” or “set of anxiety genes.” Likely, they will never be found, such as researchers at the University of Colorado Boulder (CU Boulder) recently concluded about depression.

The enormous study, published in the American Journal Of Psychiatry, found that after investigating candidate genes for depression, the 18 candidate genes most commonly referred to in previous research were no more influential than genes picked out at random.[3]

The team concluded that early theories about “depression candidate genes” were wrong.

"This study confirms that efforts to find a single gene or handful of genes which determine depression are doomed to fail.” said first study author Richard Border, who is a researcher and graduate student in CU Boulder's Institute for Behavioral Genetics.

"There's just nothing there. I hope this is the final nail in the coffin for those kind[s] of studies."

As it turns out, Dr. Keller’s words were prophetic. Several studies in the last few years have confirmed that genes have little if anything to do with medical and mental health outcomes.[4]

Furthermore, research this year (Feb 2021), published in the Journal of Affective Disorders, has confirmed that genes don’t predict mental illness.[5]

“The results obtained from this study are completely negative.”

“No gene is formally statistically significant after correction for multiple testing, and even those which are ranked highest and lowest do not include any which could be regarded as being biologically plausible candidates.”

“The distribution of results is exactly as one would expect by chance.”

“It seems unlikely that depression genetics research will implicate specific genes having a substantial impact on the risk of developing psychiatric illness severe enough to merit referral to a specialist...”

Other recent studies have arrived at similar conclusions.

Based on the latest research, it’s safe to conclude genes have little if anything to do with mental illness.

Sadly, despite the latest research, the genetic predisposition for anxiety disorder theory persists. It's not uncommon to find references to it on many medical and mental health websites even though the theory has recently been disproven.

If genes don’t cause mental illness, what does?

We know that our environment and behavior have significant influence over gene expression,[6] which accounts for identical twins having vastly different medical and mental health outcomes.

Rather than genes causing medical and mental health destinies, environment and behavior play the major role.

For instance, experiencing early life trauma, poverty, cross-generational transmission, abandonment, and so on are well-established factors in the development of anxiety disorder.[7][8]

We regularly see these factors when working with anxious clients.

Research has also shown that mind/body interventions can change our DNA and that talk therapy changes the brain.

Since anxiety disorder is caused by learned unhealthy behavior, which can be changed and the reason behavioral therapy is so effective, anxiety disorder can be successfully overcome with the right information, therapy, and support.[12]

Our ability to overcome anxiety disorder could be undermined if we believe our behavior is at the mercy of our genes.

This perception can make us victims of anxiety disorder rather than empowering us to make healthy change.

Therefore, anxiety is a result of a certain style of behavior and not caused by genes. Dealing with the true cause of anxiety disorder – unhealthy apprehensive behavior that is motivated by unhealthy underlying factors – addresses the anxiety disorder problem.

All of us have the ability to overcome anxiety disorder when we access the right information, help, and support, and when we do the required work.

The implications of that realization could make you feel more anxious, and even depressed.

If you believe you have no hope, this mindset can produce the very outcome you dread – trapped in an anxious life with no hope of ever escaping it – which can create more anxiety and depression.

But if you believe there is a lot you can do to overcome issues with anxiety, that realization alone can bring hope and encouragement, both of which can alleviate a great deal of anxiety and hopelessness.

Anxiety isn’t about something that’s “gone wrong” in the brain that you can’t correct. Anxiety is about unhealthy behavior we can change.

All of us at anxietycentre.com have experienced anxiety disorder and know how out of control it can seem. But we’ve also overcome it and know it can be successfully overcome with the right information, help, and support.

No one needs to suffer needlessly!

anxietycentre.com: Information, support, and therapy for anxiety disorder and its symptoms, including Anxiety and Genetic Predisposition.

I want you to know I appreciate your help and I will never forget you and what you did for me. I am free and I am healthy. I don't know where I would be without you. Everyday I am grateful for being able to mature with you helping me.
April, USA