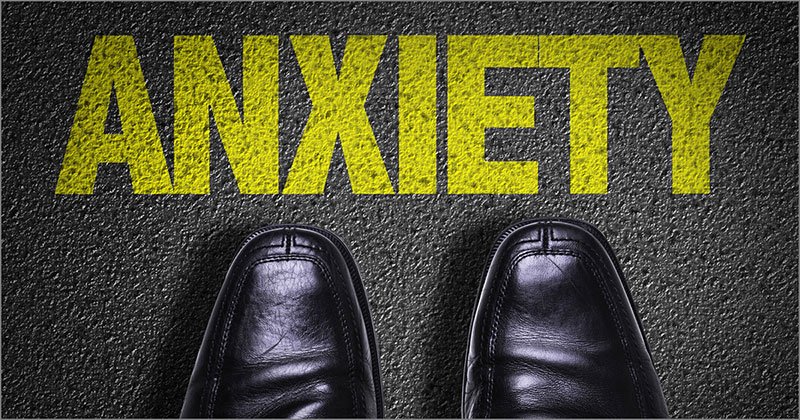 Our Anxiety 101 section gives you an overview of anxiety, anxiety disorder, its symptoms, causes, and what is required to overcome it.

Anxiety can be defined as:

Anxiety is a state of apprehension that results from anticipating something we think might be dangerous or unpleasant.

For example, if you are standing in the middle of the road and see a speeding car approaching that you think could hit you, imagining the car could hit you, and the harm it could cause creates a sense of danger that motivates you to take immediate protective action. Imagining being in harm's way creates a troubled state of mind. This troubled state of mind and sense of urgency to escape danger is anxiety.

Sensing danger so that you can get out of harm's way is part of the body's survival mechanism, which is designed to protect you. So even though anxiety can feel strong at times, it's an important part of your survival mechanism that keeps you safe…and alive.

In this regard, anxiety is our ally and shouldn’t be perceived as being something ‘bad’ or unwanted.

Anxiety is caused by apprehensive behavior!

Behavior can be defined as:

Behavior is a way in which a person thinks and acts.

For example, if you think you'd like to eat a piece of chocolate cake, and then decide to go to the store and buy a chocolate cake, cut a piece, and eat it, all that occurred because of behavior.

Thoughts preceded a decision, and the decision motivated an action. In other words, we first think, decide, and then act. While sometimes it can seem like we act first, it’s not that we do but that our preceding thoughts and decisions happen so quickly, and often automatically, it SEEMS like our actions came first. 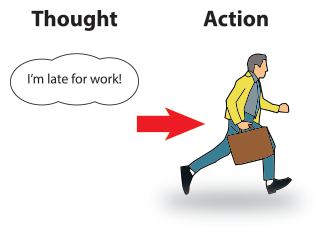 In every case, we first think about and decide what to do BEFORE we make an action.[3][4]

You can demonstrate this by slowing down your actions. You’ll see that when you slow down your actions, every action you take is preceded by thoughts about it and a decision to deliberately act in a certain manner.

Thoughts and decisions precede willful actions even though those thoughts might be subconscious, automatic, or habituated!

Anxiety is caused in the same way. We first think about a situation or circumstance, determine to see if it’s dangerous, assess it to see how dangerous it is, and then decide to act accordingly.

For example, if we believe an impending situation or circumstance won’t cause us harm, we determine that it is harmless and behave accordingly. If we believe an impending situation or circumstance can harm us, however, we’ll most likely take some type of action to avoid the danger or prepare to deal with it. Nevertheless, whatever action we decide, it was first determined by what we thought about it and a decision about how to deal with it. So again, we first think, then decide, and then act. The combination of thinking, deciding, and acting is considered behavior. Since deciding is a part of thinking, behavior can be defined simply as: thinking and acting.

With regard to anxiety, we create a troubled state of mind by thinking about a particular situation or circumstance in an troubling (apprehensive) manner.

Apprehensive can be defined as:

Whenever we think that something bad, unpleasant, and/or harmful might happen, we are behaving in an apprehensive manner. This type of behavior creates the state of anxiety.

For example, worry is apprehensive behavior that creates the state of anxiety.

Worry can be defined as:

NOTE: There are many things that can make us FEEL anxious, such as a side effect of medication, and adverse reaction to a recreational drug, something in the environment, such as a loud noise, etc., but that doesn’t mean a person has to behave anxiously.

There can be a difference between FEELING anxious and behaving anxiously.

For more information, visit our "What Causes Anxiety" article.

What happens when we’re anxious?

When we behave in an apprehensive manner, the body triggers our natural survival response, otherwise known as the stress response, fight or flight response, emergency response, or the fight, flight, or freeze response (since some people freeze when they are afraid like a “deer stuck in headlights”).[6][7][8]

The stress response causes the body to secrete stress hormones, which are stimulants, into the bloodstream where they travel to targeted spots to bring about specific physiological, psychological, and emotional changes that enhance the body’s ability to deal with a threat—to either fight with or flee from it—which is the reason the stress response is often referred to as the fight or flight response. 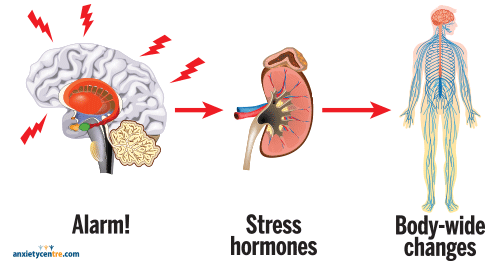 The stress response is an integral part of the body’s survival mechanism. The body experiences a stress response whenever we perceive a threat so that the body is better equipped to deal with the threat: to either fight or flee.

For more detailed information about the stress response and the many changes it can bring about, visit our “Stress Response” section. Recovery Support members can visit Chapter 3 in the Recovery Support area of our website. This information provides in-depth details about the stress response, the many changes it causes in the body, why it causes those changes, what specific changes occur, and how long these changes can last. And much more.

What are anxiety symptoms?

There are two types of anxiety symptoms:

The stress response causes many physiological, psychological, and emotional changes that affect the body in many ways. Mental health care professionals call the sensations associated with these changes “symptoms of anxiety.”[7][8][9]

When the body becomes overly stressed and stimulated, it can exhibit symptoms of stress long after an active stress response has ended. These are also called anxiety symptoms.

We call them anxiety symptoms because behaving in an overly apprehensive manner is the main source of the stress that causes the body to trigger a stress response or to become chronically stressed and then symptomatic.

Even though anxiety symptoms can be powerful (they are supposed to be to motivate you into immediate action), they are merely symptoms of stress and needn't be a cause for concern. To eliminate anxiety symptoms, however, we need to end the active stress response, or reduce stress and give the body sufficient time to recover from hyperstimulation. As the body recovers from an active stress response or hyperstimulation, it stops exhibiting symptoms.

Click on the corresponding link for more detailed information about the “Stress Response” or “Hyperstimulation”.

What is an anxiety attack?

This difference is important; however, as the DSM-5, The Diagnostic and Statistical Manual of Mental Disorders (DSM-5), published by the American Psychiatric Association (APA), uses panic attack as a “clinical term” used to define symptoms and determine treatment options whereas anxiety attack is not used in a clinical manner.[14] The difference can impact treatment by a mental health professional.

So, once again, an anxiety attack is merely an episode of high-degree anxiety that is accompanied by a high-degree stress response and resulting symptoms.

What is anxiety disorder?

Everyone experiences anxiety from time to time. This is normal. Anxiety is said to become a disorder when it interferes with a normal lifestyle.

These are just three examples of many, many ways behaving apprehensively and its stress response consequences can interfere with a normal lifestyle.

Therefore, Anxiety Disorder is a term mental health professionals use to describe anxiety that interferes with a normal lifestyle. Keep in mind that this term should not be confused with a medical diagnosis as this term is merely used as a way of categorizing people who struggle with problematic anxiety.

Again, the term anxiety disorder should not be confused with a medical term as anxiety is not a medical condition but a mental health condition that can cause lifestyle impairment.

This is not to suggest that anxiety disorder can't cause intense, unusual, and disturbing symptoms, which can cause significant impairment because it can!

For example, high-degree anxiety, such as a panic attack, can cause profound anxiety attack symptoms. Moreover, when the body experiences high-degree hyperstimulation, it can cause significant discomfort physically, mentally, and emotionally. Sometimes the impairment can be so profound that significant lifestyle impairment occurs.

Nevertheless, in spite of the impairment anxiety disorder and its symptoms can cause, anxiety disorder can be successfully overcome, which we talk about next in our Anxiety Recovery 101 section.

anxietycentre.com: Information, support, and therapy for anxiety disorder and its symptoms, including Anxiety 101.

3. Lafattuta, Kristin, et al. "How Do Thoughts, Emotions, and Decisions Align? A New Way to Examine Theory of Mind in Middle Childhood and Beyond." Journal of Experimental Child Psychology, Sept. 2016.

I enjoy life a little more every day and I really love the new me. Thanks Hellen and keep up your good work!
Annie, Canada