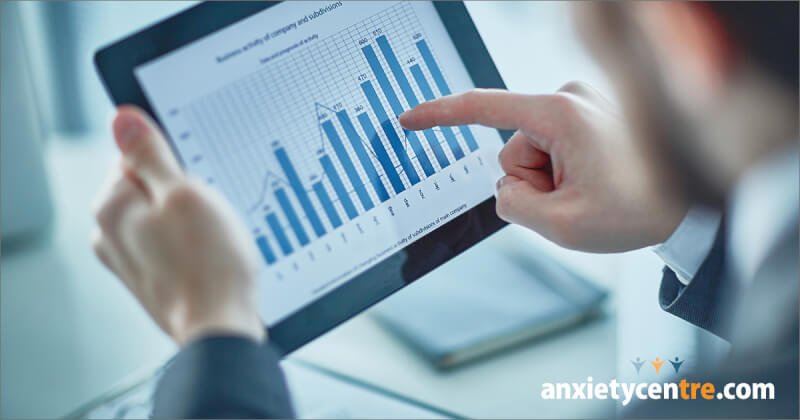 Anxiety Disorders affect 18.1 percent of adults in the United States (approximately 40 million adults between the ages of 18 to 54). - National Institute of Mental Health (NIMH).[1]

Current estimates put this number much higher - approximately 30 percent - as many people don't seek help, are misdiagnosed, or don't know they have issues with anxiety.

Approximately 33.7 percent of (3 in every 10) Americans will have an anxiety disorder at some point in their lives.[2] Some researchers believe this number is closer to 50 percent (half of all Americans).

Most people have moderate and above degrees of anxiety disorder 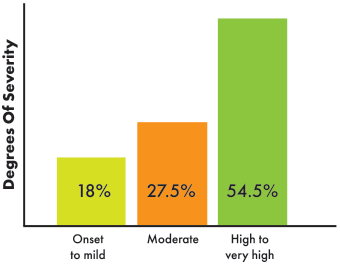 According to the National Institute of Mental Health (NIMH), 43.5 percent of anxiety disorder sufferers have early-onset to mild anxiety, 33.7 percent have moderate anxiety, and 22.8 percent have high to very high degree anxiety.[3]

93 percent of anxiety disorder sufferers in Canada said they are taking, or have taken a medication for their anxiety.[4]

According to The Economic Burden of Anxiety Disorders, a study commissioned by the ADAA and based on data gathered by the association and published in the Journal of Clinical Psychiatry, anxiety disorders cost the U.S. more than $42 billion a year, almost one third of the $148 billion total mental health bill for the U.S.[5]

More than $22.84 billion of those costs are associated with the repeated use of healthcare services, as those with anxiety disorders seek relief for symptoms that mimic physical illnesses.

Anxiety has become the number one mental health issue in North America. It's estimated that one third of the North American adult population experiences problems with anxiety.

A recent survey showed 41 percent of employees from a range of industries reported high levels of anxiety in the workplace.

A recent study by University of Toronto Scarborough and Rotman School of Management professors Julie McCarthy and John Trougakos, along with Bonnie Cheng from Hong Kong Polytechnic University, found that high levels of emotional exhaustion that come from workplace anxiety can directly lead to lower job performance.

Another report found that more than half of college students sought help for their anxiety issues. Research has found that anxiety can impede learning, which often leads to lower academic achievement and performance. 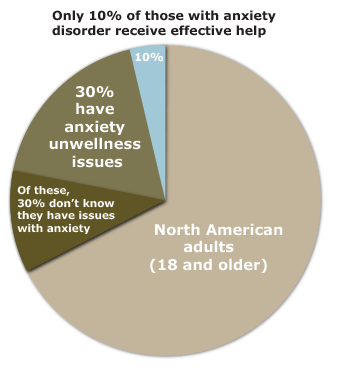 According to our statistics over the last 16 years, 54 percent of woman and 46 percent of men experience anxiety disorder.

Anxiety Disorder Affects All Ages And Walks Of Life

Below is a graph from the Canadian government showing the percentages of people affected by anxiety disorder based on age:

Age-specific annual prevalence (%) and rate ratios of the use of health services for mood and anxiety disorders among people aged one year and older, by sex, Canada, 2009-2010 Photograph: The Canadian Government[2]

Based on several studies from various locations around the world, the highest incidence of anxiety disorder occurs between the ages of 30 to 40 years old.

The highest incidence of onset is between the ages of 16 and 26.

Anxiety And How It Affects Society

These are just a few of the ways unresolved anxiety affects our society.

Those who have an anxiety condition:

In addition to anxiety disorder impairment, those who seek help may encounter real and perceived barriers to help:

We encourage anxiety sufferers to seek professional help. Only through proper help can issues with anxiety disorder be overcome.

Many believe that anxiety disorder will “just go away”. Unfortunately, the reverse is often true…the longer a person struggles with anxiety disorder, the more entrenched it becomes and the more complex it is to resolve. Seeking proper help early provides the best results.

With the right help and healing, those who have experienced an anxiety condition can:

These are just a few of the many benefits healing and a return to renewed health can bring.

Here is a listing of common anxiety symptoms.

Visit our “Impact Of Anxiety Disorder” article for information about how anxiety disorder can severely impact a person’s life.


“The more anxious or stress-reactive an individual is, the stronger the bottom-up signal we observed from the amygdala to the dorsolateral prefrontal cortex,” said the study’s senior author, Vinod Menon, PhD, the Rachael L. and Walter F. Nichols, MD, Professor and professor of psychiatry and behavioral sciences. “This indicates that the circuit is being hijacked in more anxious children, and it suggests a common marker underlying these two clinical measures, anxiety and stress reactivity.”

Return to our Anxiety and Other Mental Health Statistics page.

Anxiety centre, thank you for everything. I am determined more than ever to take my successful personal journey and pass it onto others :).
J.S., Central Europe