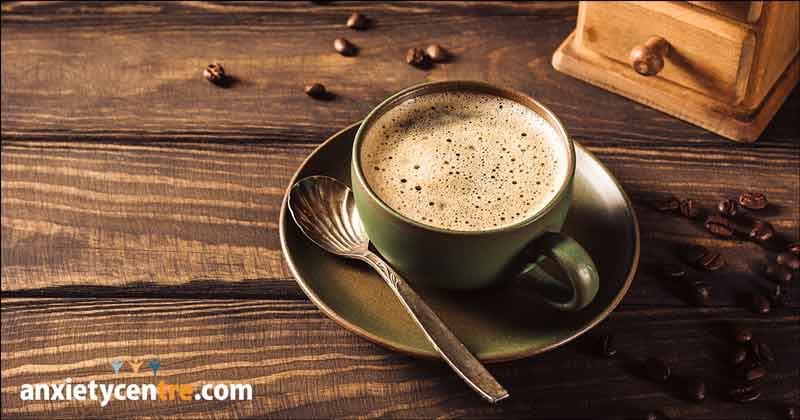 Can drinking caffeinated coffee aggravate anxiety and possibly slow down my recovery from anxiety disorder?

Yes, caffeinated products can aggravate anxiety disorder and interfere with recovery. Here’s why:

Anxiety activates the stress response. The stress response secretes stress hormones into the bloodstream where they travel to targeted locations to bring about specific physiological, psychological, and emotional changes that give the body an “emergency boost” of energy and resources.

This vital survival reaction is intended to help us either fight against or flee from danger, which is the reason the stress response is commonly referred to as the fight or flight response.

The stress response brings about its many changes because stress hormones are powerful stimulants that stimulate the body into action.

This is particularly true when we overly stimulate the body due to overly apprehensive behavior.

When the body becomes overly stressed, which we call stress-response hyperstimulation, it can exhibit chronic symptoms.

Therefore, anxiety symptoms are symptoms of stress. They are called anxiety symptoms because anxious behavior that creates anxiety is the main source of the stress that stresses the body, which produces symptoms.

With that in mind, caffeine brings about its stimulating effect by causing the secretion of stress hormones into the bloodstream.

Since caffeine is a stimulant that stimulates the body, ingesting caffeine into an already anxious and hyperstimulated body is like pouring gas on an already raging fire.

Moreover, research has shown that caffeine, even in moderate amounts, is linked to anxiety and depression.[1][2][3]

For instance, a study by Kenneth Kendler, director of the Virginia Institute for Psychiatric and Behavioral Genetics, found that prolonged use of caffeine increased the likelihood of the development of anxiety and depression.

The study showed that heavy caffeine users were also almost twice as likely to develop panic disorder, generalized anxiety disorder, and major depression. Even among those who moderately consumed caffeine, there was an increased likelihood of developing these disorders.

Kendler went on to say that, “Any form of drug use is broadly related to aspects of psychopathy. You’re consuming a substance that influences the way you think.”

The findings of this study appeared in the December (2006) issue of Psychological Medicine.

If you want to see a reduction and the eventual elimination of anxiety symptoms, we recommend the complete elimination of stimulants, such as caffeinated products.

And while you may not WANT to eliminate caffeine from your diet, continually ingesting caffeine can be a major barrier to recovery and a major contributing factor to the persistence or escalation of anxiety symptoms.

So yes, caffeine consumption is a “no-no” for successful anxiety recovery.

Once your body has recovered, you can reintroduce caffeine. But if you find it brings a return of symptoms, you may need to eliminate it for good. Some people have to do this, while others notice the stimulation but not to the point of it causing problems.

Some people say, “But I don’t want to stop drinking my coffee or eating chocolate. I’m just not prepared to do that.”

Well, like all other recovery strategies, you don’t have to do anything. No one can force you into making behavioral change. But then, it’s unrealistic to expect sufficient results.

Ingesting caffeine stimulates the body, and a body that’s already hyperstimulated and symptomatic will react badly to further stimulation. There is no getting around that reality.

When the body is hyperstimulated, it needs a reduction in stimulation and time to recover. The body won’t stop presenting symptoms UNTIL it has recovered.

As you can see, continually stimulating the body by regularly ingesting stimulants, such as caffeine, can easily undermine the recovery process.

anxietycentre.com: Information, support, and therapy for anxiety disorder and its symptoms, including Caffeine And Anxiety.

3. Strachan, Gareth. "What affect does caffeine have on depression?" MedicalNewsToday, 19 Aug 2019, https://www.medicalnewstoday.com/articles/313988

I am incredibly grateful for her and the Anxietycentre's commitment to helping people get well. They are truly the best!
Kris, USA