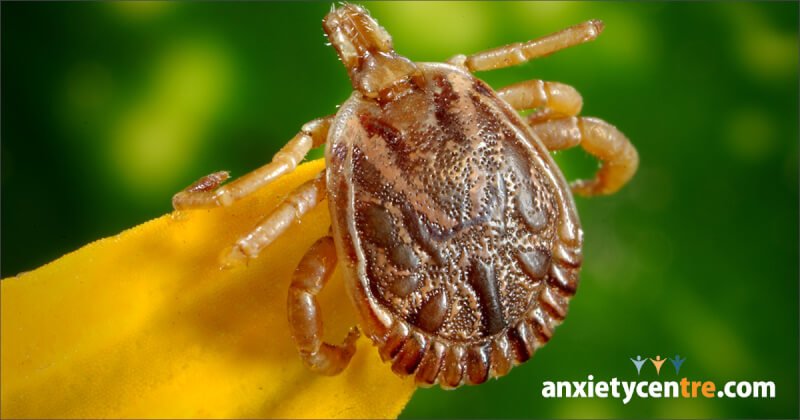 Determining the difference between Lyme disease and anxiety disorder is a controversial topic in today’s world. Discerning their differences has become a confusing area of health care both for those suffering from these conditions, as well as for those attempting to treat them. Because both conditions can cause a plethora of similar symptoms, it can be challenging to determine which condition is causing the symptoms, and therefore, what treatment option is appropriate. As a Lyme-literate therapist and anxiety specialist, who is also a Chronic Lyme sufferer, I feel it is important to address the relationship between Lyme disease and anxiety in the hope of bringing some clarity to those who find themselves dealing with both.

It may surprise you when I state that I do not support the oft-heralded premise that Lyme disease can cause anxiety disorder. To be clear, I am not suggesting that it is impossible to first become aware that you have a struggle with anxiety at, or near, the onset of Lyme disease, or that some physical conditions cannot exacerbate the symptoms of anxiety. What I am saying is Lyme disease cannot, at this point, be proven to be the cause of anxiety.

We know this to be true for several reasons. First, anxiety can be successfully treated. One of the reasons we see such favorable success rates with our anxiety disorder recovery program at Anxietycentre.com is because we treat anxiety as a behavioral disorder and one that we witness being remedied through behavioral and psychological means. We have seen countless instances of complete recovery by our clients using this approach. If behavioral issues didn't cause anxiety disorder, our approach would have little effect let alone produce long-term wellness.

Lyme disease is often wrongfully blamed for anxiety, causing sufferers to believe there is nothing that can be done to improve their anxiety condition. In addition, Lyme patients are often told by medical professionals that they have anxiety only, and not Lyme, suggesting a Lyme disease diagnosis is false or pursuing a diagnosis is a waste of time. Either approach renders a significant injustice towards the Lyme/anxiety sufferer. We are experts in our own bodies, and we know ourselves better than anyone else ever can. As such, we are the only individuals qualified to determine if we are dealing with one, the other, or both anxiety and Lyme disease.

In addition, there is no mechanism in the body that would allow Lyme to create anxiety because anxiety stems from a cascade of events rather than from one single element.

For instance, anxiety can be defined as a feeling of worry, nervousness, or unease, typically about an imminent event or something with an uncertain outcome.

Furthermore, anxiety disorder – when anxiety interferes with a normal lifestyle - occurs when this cascade of events recurs frequently, and so much so, that the body becomes hyperstimulated and symptomatic since stress hormones are stimulants that stimulate the body.

Quite simply, it is impossible for the Lyme spirochete to cause this cascading of events. To date, there is no clinical research that attempts to uncover any means by which the Lyme bacteria might actually cause anxiety never mind anxiety as a disorder.

It is, however, exceedingly stressful to live with Lyme disease. To visit doctor and after doctor, and to undergo test after test only to be disbelieved and ill-treated as you suffer horrific pain and other symptoms that make life very difficult indeed, can represent a trauma for our brains and bodies.  Living with Lyme can, therefore, contribute to anxiety disorder due to the pain and uncertainty of the disease and its impact on lifestyle. As a result, Lyme disease becomes an exacerbating factor for anxiety unwellness because living with Lyme can make an existing anxiety condition worse, as well as increase symptoms even though Lyme is not the initial cause of the anxiety unwellness.

Many people recognize a correlation between anxiety and Lyme, as they do frequently co-exist as described above. Coexistence, however, does not indicate a causal relationship and should not be assumed to without the appropriate accompanying research evidence. Scientific study methods are based on this premise[4] and should not be abandoned in an effort to deny those suffering the treatment they deserve. To do so would be both misleading and unethical. However, this is exactly what we see portrayed in countless articles that show correlation but do not even attempt to prove causation.

The most frequent question I address from my clients living with Lyme disease is, “How do I know which of my physical symptoms is caused by Lyme disease and which stem from anxiety?”  This is a difficult question to answer, as ultimately the only way we can be 100% certain is to resolve the anxiety. At that point, remaining symptoms are from Lyme. Recovering from anxiety disorder can take some time, however, and it is helpful to be at least somewhat aware of the differences between symptoms while one is still on the path towards anxiety wellness.

As such, there are a few points that can be useful to consider. First, Lyme disease symptoms fluctuate, ebb and flow with the life-cycle of the spirochete, which is not the case with anxiety. While it's true anxiety symptoms can change and fluctuate, they do not usually display the same pattern. Lyme symptoms tend to become more severe for a period, occurring generally every 3-5 weeks, and using psychotherapeutic techniques will not alter their severity. With anxiety symptoms, however, there are various tools and psychotherapeutic approaches, such as those at our website, that can help reduce anxiety symptoms both in the moment and as you work toward lasting success.  There will generally be a marked difference in the effectiveness of such tools when applied to Lyme symptoms versus anxiety symptoms.

In addition, feelings of anxiety, or impending doom, frequently accompany physical anxiety symptoms but do not necessarily accompany Lyme symptoms. It is possible to feel both anxiety emotions and Lyme symptoms at the same time due to the potential of coexistence. However, they aren’t found together as often as would anxiety emotions and physical anxiety symptoms. Therefore, it can be helpful to note how you feel when experiencing a physical symptom and what you are thinking at the time.

If you suffer from Lyme, you are likely also aware that Lyme disease is frequently called the “great mimicker,” as its symptoms are often found to be similar to those associated with autoimmune diseases such as Chronic Fatigue Syndrome, Fibromyalgia, Parkinson’s, MS, Lupus, etc.[6] As such, symptoms that are more typically found among these diseases are also those that we can more credibly suspect as being tied to Lyme disease.

First, treating the anxiety will relieve the disabling symptoms of anxiety and the emotions associated with it. Second, there is substantial research evidence that suggests untreated anxiety can compromise the immune system,[7] such that it will encourage the proliferation of the Lyme bacteria and result in the worsening of Lyme disease symptoms, as well as the symptoms of the anxiety condition itself.

What can we learn from what we do know about anxiety, Lyme disease, and the relationship between them?  Victory over anxiety is possible, whether you are dealing with Lyme disease or not. There is no need to continue to suffer from the effects of anxiety disorder simply because you are also struggling with Lyme disease. Unfortunately, Lyme disease is an area where research still doesn’t know much about recovery. But this is not the case with anxiety disorder recovery. There is substantive research to show recovery from anxiety disorder is not only possible, but the road to recovery is well known and well traveled.[8][9][10][11] Anxiety unwellness need not be your permanent reality.

anxietycentre.com: Information, support, and therapy for anxiety disorder and its symptoms, including Knowing The Difference Between Lyme Disease And Anxiety Disorder.

4. Ksir, Charles, and Carl Hart. “Correlation still does not imply causation”. The Lancet, May 2016.

Now, I am happily married and have the most wonderful daughter in the world because you taught me to live the life I wanted to have. I feel blessed everyday of my life.
Theodora, Greece