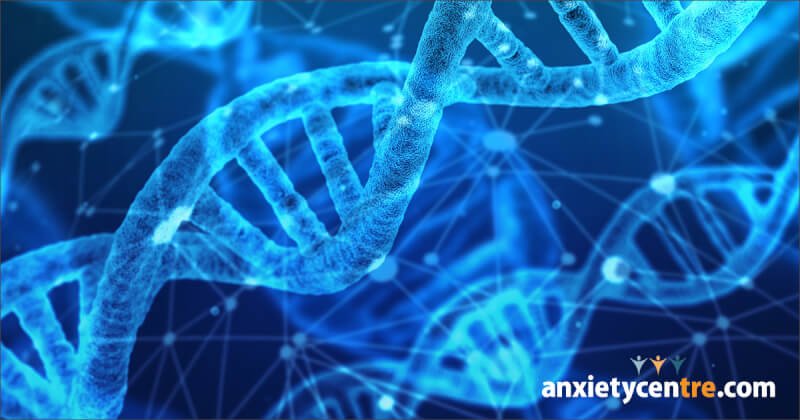 With the advent of genetic research, there has been much speculation about the cause of mental illness, such as anxiety disorder and depression. Initially, it was theorized that all mental illness was caused by a “gene” or cascade of genes. But as the fields of epigenetics and behavioral genetics emerged, the “faulty gene or genes” hypotheses have become increasingly undermined.

We’ve maintained that anxiety disorder (and most forms of depression, if not all) were not caused by genes but by behavior, which is learned. The evidence to support our position came from years of witnessing success after success using cognitive behavioral therapy (and its many forms) as the treatment. If genes were the cause of anxiety disorder and depression, merely changing behavior would have little effect on a genetically-caused outcome. But the results from our clients proved otherwise.

It’s now known that environment and behavior greatly influence genetic expression.[1][2][3] So, when researchers claim a heritable link to anxiety disorder and depression, we believe the link is one of passed on behavior from anxious and depressed parents to their children rather than by genes.

This is also why some siblings in a family develop anxiety disorder or depression whereas others don’t. The difference is a result of the behaviors a child learns and then uses rather than what is caused by genes.

This is also the reason why the environment we grow up in and the early life experiences we have are far more influential to mental health outcomes than that of genes.

For example, children who experience early life trauma, such as abuse, have a much higher incidence of developing mental illness, such as anxiety disorder and depression, than those who don’t experience abuse.[4][5][6]

To us, the cause of anxiety disorder and depression is clear: learned unhealthy behavior which can be changed.

Research over the last 15 years has also confirmed our observations that Cognitive Behavioral Therapy (CBT) and its many forms are the most effective treatment for anxiety disorder (and depression).[10][11][12][13]

Now, a recent study by the University of Colorado Boulder has confirmed that the “genes” hypotheses are in error.[14]

Their research focused on depression. The study’s press release states:

…a new University of Colorado Boulder study assessing genetic and survey data from 620,000 individuals found that the 18 most highly-studied candidate genes for depression are actually no more associated with it than randomly chosen genes.

The previous studies were incorrect -- or "false positives" -- and the scientific community should abandon what are known as "candidate gene hypotheses," the authors conclude.

"This study confirms that efforts to find a single gene or handful of genes which determine depression are doomed to fail," said lead author Richard Border, a graduate student and researcher at the Institute for Behavioral Genetics.

The study authors looked at 18 genes which have appeared at least 10 times in depression studies. Based on their findings, senior author, Matthew Keller, associate professor of Psychology and Neuroscience said, “We found that, as a set, these candidate genes are no more related to depression than any random gene out there. The results, even to us, were a little bit stunning."

The press release went on to say:

Keller notes that in the field of genetics, scientists have known for years that candidate-gene hypotheses were flawed. But hopeful researchers in other fields, including psychology, have continued to publish studies -- often based on smaller sample sizes -- which have kept the idea of a small set of "depression genes" alive.

"It's like in 'The Emporer Wears No Clothes.' There's just nothing there," said Keller. "I hope this is the final nail in the coffin for those kind of studies."

We believe one of the most important admissions the researches make is that:

“consumers should be wary of claims that individual genes have large effects on complex behaviors,” said Border.

While risk of some medical conditions, like breast cancer and Alzheimer's disease, has been clearly linked to individual genes, it's not so simple with traits like depression.

"Any time someone claims to have identified the gene that 'causes' a complex trait is a time to be skeptical," said Border.

Anxiety disorder and depression are caused by behavioral issues, which can be addressed. Therefore, there is no reason to suffer needlessly. The road to recovery is well known and well-traveled. If you are determined to succeed, you can with the right information, help, and support.

All of us at anxietycentre.com have successfully overcome anxiety disorder. We are passionate about helping others achieve the same level of success.

The University of Colorado Boulder research was published in the American Journal of Psychiatry.

anxietycentre.com: Information, support, and therapy for anxiety disorder and its symptoms, including Depression Genes Hypotheses Debunked.

11. Hofmann, Stefan, et al. “The Efficacy of Cognitive Behavioral Therapy: A Review of Meta-analyses.” US National Library of Medicine, 1 Oct. 2012.

My experience with the Anxiety Centre and Stacey Ellertson was life changing. I can’t thank him enough for the support and help he gave me during a difficult stage of my life.
Daniel R., USA