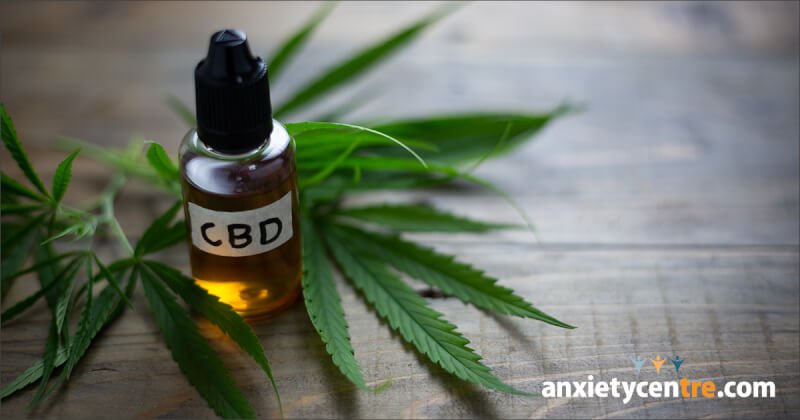 Cannabidiol (CBD) is gaining a lot of media attention lately because of its reported health benefits, including reducing anxiety. But can CBD oil reduce anxiety? Is it safe? Do we know the long-term health effects?

Admittedly, there is a lot more to learn about CBD and its effects on health. This CBD Oil and Anxiety article explains what we currently know.

Cannabidiol (CBD) is an extract from the cannabis plant. It can be used as an oil that is rich in chemicals called cannabinoids that bind to special receptors throughout the body.[1]

Delta-9-THC (tetrahydrocannabinol), which causes the "high" associated with marijuana, is the best known cannabiniod. But THC is just one of many cannabinoids. Cannabidiol also binds to the same receptors as THC but doesn’t produce a “high.”[1][2]

“In humans, CBD exhibits no effects indicative of any abuse or dependence potential…. To date, there is no evidence of public health related problems associated with the use of pure CBD.” – World Health Organization[3]

Many proponents claim CBD oil has many health benefits,[2] including slowing the growth of cancer, a pain reliever, an anti-inflammatory, an anti-nauseant, to help with sleep, and reducing anxiety, to name a few.

CBD oil can be taken in many forms, such as used as a salve for pain, taken internally via drops, spray, or in food, or inhaled.

Does CBD produce a high?

Extracted from hemp, CBD does not produce a “high.”[1][2] Hemp is a type of cannabis plant that is grown for industrial use, such as making clothing, paper, rope, textiles, shoes, food, bioplastics, insulation, and biofuel.

CBD oil derived from marijuana, however, does produce a “high.”

How Does CBD Oil Work?

Our bodies produce endocannabinoids naturally. These cannabinoids bind to receptors throughout the body.[4][5] While the exact science is still unknown, some suggest that using CBD may help people whose bodies don’t produce enough endocannabiniods on their own. Others suggest taking CBD increases the longevity of the body’s natural cannabinoids, which can prolong the calming effect.

Since research on CBD is in its infancy, much is still unknown about the effectiveness of CBD or its long-term effects.

Can CBD Oil Help With Anxiety?

CBD is thought to have a calming effect on the nervous system. At this time, however, research and anecdotal evidence is mixed on whether CBD can help with anxiety disorder and its symptoms. Some people find it helpful in reducing anxiety, some find it does nothing for them, and some find it makes things worse.

The remaining 75.3% of respondents said they hadn’t tried CBD.

The study also found that 22% of participants experienced a worsening of problems compared with the previous month’s assessment.

Overall, the study reported that CBD was well tolerated by most participants with only a few having a negative reaction.

It’s worth noting that the existing psychiatric medications were also taken during the study and many of the participants stopped taking CBD throughout the study leaving only 37.2% remaining on CBD at the third month assessment.

Another study found that CBD oil had no significant anxiolytic (anti-anxiety) effect.[7]

CBD can also be addictive. Symptoms of withdrawal include:

Although more study is required, research has found some long-term effects associated with CBD use.[4][5][9] They include:

At this time, the long-term effects of CBD are unknown. More research is required.

When I asked Liliana Tosic (R.H.N. – Registered Hollistic Nutritionist) her perspective on CBD, she provided this response:

Among herbalists and natural/holistic health professionals, there’s a well-accepted truth about plants. The sum of all its parts is much greater than any single, isolated component.

Traditional Chinese and Ayurveda Medicine insists on using full-spectrum herbal extracts in place of single, isolated components to take advantage of the whole plant’s synergistic properties. Isolates from plants rarely have the same degree of health activity as the whole plant. This is the case with vitamins too.

While CBD may be the most recognized phytocannabinoid in hemp, the plant contains other vitally important cannabinoids, as well, such as CBG, CBC, CBDV and CBN, which all offer exciting health properties.

Hemp also contains nearly 200 terpenes, active compounds that give plants their taste and smell. Herbalists and holistic health professionals believe the terpenes in hemp are thought to interact synergistically with its phytocannabinoids to create an “entourage effect” that enhances the healthful effects of each individual component.

Here is a brief background about the human endocannabinoid system (ECS):

The proper functioning of our ECS also depends on adequate status of our omega-3. Omega-3 is therefore considered a good brain fat needed in our diet. The feeling of euphoria that people get after exercising hard is from an increased level of anandamide, not just endorphins.

One important way we can nourish and support ECS is to exercise regularly. Moderate exercise not only helps keep ECS in shape, it dramatically increases our levels of anandamide and 2-AG. That feeling called “runner’s high” is the effect.

Most believe that lifted mood comes from a release of endorphins alone. Researchers now point out that this euphoric feeling is also coming from an increase in anandamide. Anandamide targets CB1 receptors as well as the opioid and endorphin receptors. The higher the anandamide levels, the better we feel.

CBD oil with just CBD alone cannot fully support your body’s endocannabinoid system (ECS). The ECS needs all of the phytocannabinoids and terpenes in hemp to function effectively, not just CBD.

That’s why I do not recommend using CBD oil alone. Doing so is mainly ineffective and a waste of money. If CBD does not attach to the CB1 or CB2 receptors, it can't fully support ECS.

Yes, more research is needed. As CBD pertains to anxiety, since each body is somewhat chemically unique, what might work for one person might not for another. If you are interested in trying CBD, we recommend you first talk with your doctor to see if it’s right for you. Also talk with your pharmacist if you are taking any prescription or over-the-counter medications. Then, use caution.

There are many natural ways to reduce symptoms. These natural ways don’t produce potentially harmful side effects or long-term health effects.

If you are looking for lasting, natural success, therapy is the best option.

It’s our passion to help people overcome problematic anxiety and its symptoms. We desire they go on to live satisfying and fulfilling lives without the need for “something” to manage symptoms.

All of us at anxietycentre.com have overcome anxiety disorder. We believe you can too!

Yes, recovery is work and takes time. But once it’s done, it’s done for good. This can be a realistic expectation for you, too.[13]

The Recovery Support area of our website has over 10,000 pages of self-help information, such as:

There’s so much more.

If you are interested in overcoming anxiety disorder for good, the Recovery Support area contains “must know” information.

8. Iffland, Kertin, et al. "An Update on Safety and Side Effects of Cannabidiol: A Review of Clinical Data and Relevant Animal Studies." Cannabis and Cannabinoid Research, 1 June 2017.

13. DISCLAIMER: Because each body is somewhat chemically unique, and because each person will have a unique mix of symptoms and underlying factors, recovery results may vary. Variances can occur for many reasons, including due to the severity of the condition, the ability of the person to apply the recovery concepts, and the commitment to making behavioral change.

And after doing a thorough diagnosis, she recommended appropriate vitamin and mineral supplements in the areas where I am deficient. Liliana is supportive and understanding for anxiety disorder sufferers, and has a lot of personal experience to share that helped with my personal recovery.
G.E., Italy