Anxiety Is A Behavioral Wellness Issue 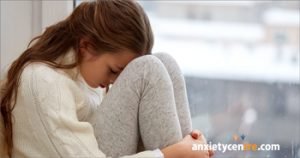 In an online poll we conducted in May, 2014, 58 percent of respondents said that there was something wrong with people who had anxiety disorder, and that anxiety disorder was associated with a negative stigma.

In another online poll we conducted in January, 2015, 80 percent of respondents said the term ‘mental illness’ suggests that there is something wrong with a person’s mind.

Is it any wonder anxiety disorder is associated with a negative stigma?

What’s more troubling is that research shows that only one third of people who struggle with problematic anxiety seek help. And the biggest reason for not seeking help is because of the negative stigma attached to having a ‘mental illness.’

Unfortunately, not seeking help could cause a lifetime of needless struggle.

Why behavioral wellness and not mental illness?

The term mental illness has its roots way back in the days when anxiety (and other mental health issues) was thought to have been caused by a disease with the brain, similar to other bodily diseases, such as heart disease and cancer. Attempts to treat anxiety date back as far as 5000 BCE. So, the concept of anxiety being a disease of the brain goes a long way back.

But even after all this time, the ‘physical disease’ perception persists even today, and is still strong with certain medical and mental health professionals.

For example, in a recent radio interview, a representative for the Canadian Mental Health Association called anxiety disorder “a disease of the mind like any other medical disease.” Of course I was appalled, as anxiety is no such thing. But this is just one example of many where the ‘physical disease’ notion still persists even among mental health professionals who should know better.

Today, however, we know much more about anxiety, its causes, and its treatment. Anxiety is no more a disease of the brain or mind than being angry or disappointed are.

So, what causes anxiety?

The term ‘anxiety’ is defined as: a feeling of worry, nervousness, and unease typically about an imminent event or uncertain outcome.

That’s right. A style of behavior causes a feeling of worry, nervousness, and unease, and therefore, anxiety.

Worry can be defined as: allowing one’s mind to dwell on difficulty or troubles.

Behavior is defined as: a way in which one thinks and acts; how one conducts oneself.

Apprehensive behavior causes anxiety.  Anxiety is NOT caused by a disease of the brain or mind.

This is evidenced by the fact that almost everyone experiences anxiety from time to time. People who struggle with persistent anxiety, however, do so because they have learned to view the world in an overly apprehensive manner, and not because there is something wrong with their brains or minds. Perceiving the world in an overly apprehensive manner is learned behavior. We explain this in great detail in the Recovery Support area of our website.

Nevertheless, because anxiety is caused by a certain style of behavior, we suggest that problematic anxiety be classified as a "behavioral wellness" issue and not a mental illness issue.

While there are real mental health illnesses - where there is damage or disease that affects the brain and/or mind - anxiety is not one of them (neither is depression, and many others). Therefore, we believe problematic anxiety would be better served by classifying it as a "behavioral wellness" issue, and not a mental illness.

To that end, and to eliminate the negative stigma associated with anxiety disorder, from this point on, we are going to be referring to problematic anxiety as a behavioral wellness issue and not a mental health issue. We encourage all of our readers to do the same. Public opinion can make a positive difference when dealing with problematic anxiety.

Not only will this change benefit sufferers who don’t seek help but it will also help those working at recovery and their affected others.

It’s time to call problematic anxiety a ‘behavioral wellness’ issue because it’s not a mental illness.

anxietycentre.com: Anxiety is a 'Behavioral Wellness' issue, not a mental illness.

And after doing a thorough diagnosis, she recommended appropriate vitamin and mineral supplements in the areas where I am deficient. Liliana is supportive and understanding for anxiety disorder sufferers, and has a lot of personal experience to share that helped with my personal recovery.
G.E., Italy