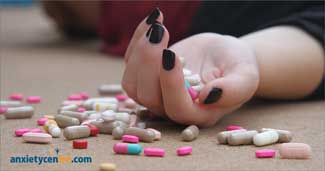 Suicide rates have been rising dramatically over the years. Some researchers are calling it a “global epidemic.” For example, according to the WHO (World Health Organization), close to 800,000 people die each year due to suicide, which is one person every 40 seconds.[1]

Worse yet, it’s particularly acute in youth. For example, suicide is the 2nd leading cause of death globally for 15-29 year olds. Moreover, researchers found that the suicide rate among U.K. students rose 56% between 2007 and 2016.[2]

Recent research has found a link between suicide attempts and prescription psychotropic medications, such as common antidepressants and anti-anxiety medications.[3] For example, researchers at the University of Colorado Anschutz Medical Campus have found that prescribed access to anti-anxiety and anti-psychotic medications may make it easier for some patients to use the drugs in attempted suicides.

The findings are alarming. The researchers found that over one third of people who attempted suicide used their prescription psychotropic medications for the attempt.

"In a study focused on people who attempted suicide, those who used a psychotropic drug in an attempt were 70% more likely to have prescribed access than patients who used other methods in their attempt," said Talia Brown, MS, PhD, lead author of the study from the Colorado School of Public Health.

This should serve as a warning to people using psychotropic medications, as well as to parents, family members, and friends. ALWAYS take allusions to wanting to end it all seriously. This is especially true for those taking psychotropic medications. If you believe a family member or friend is considering suicide, seek immediate help. Call the parents, other family members, or friends right away. Even call the police if you think the attempt is imminent. Your intervention could save the person’s life.

Fortunately, today, there are effective treatments for depression and anxiety. No one needs to suffer needlessly. Your attentiveness and compassion could be instrumental in changing a person’s life.

You can read the press release of the research below:

As prescriptions for psychotropic drugs increase, researchers at the University of Colorado Anschutz Medical Campus have found that prescribed access to anti-anxiety and anti-psychotic medications may make it easier for some patients to use the drugs in attempted suicides.

"In a study focused on people who attempted suicide, those who used a psychotropic drug in an attempt were 70% more likely to have prescribed access than patients who used other methods in their attempt," said Talia Brown, MS, PhD, lead author of the study from the Colorado School of Public Health.

The study was published last week in the Journal of Clinical Psychiatry.

The study investigated the association between prescribed access to psychotropic drugs and using them in a suicide attempt. The researchers used a large, nationally representative insurance claims dataset of 27,876 people who had attempted suicide at least once.

They found that 10,158 of them had used psychotropic drugs in their attempt. The most commonly used were antianxiety medications, followed by antidepressants, antipsychotics or mood stabilizers and stimulants. About 13 percent used more than one drug.

Overall, some 23 percent of those in the study who used psychotropic drugs in a suicide attempt had filled prescriptions for the drugs within 90 days before their suicide attempt. That led researchers to ask how so many other people who attempted suicide gained access to the medications they took.

"The most likely options were from family and friends, previous prescriptions filled prior to our exposure period, medications purchased outside of insurance plans or on the black market," the study said.

Brown said it was important to safely store all over-the-counter and prescription drugs, not just the most toxic, especially when there is a friend or family member at risk of suicide.

The findings offer a number of lessons and insights into prescribing these drugs, said the study's senior author Heather Anderson, PhD, associate professor in the Center for Pharmaceutical Outcomes Research at the University of Colorado Skaggs School of Pharmacy and Pharmaceutical Sciences.

"Restricting or modifying access to psychotropic drugs will require increased attention by all healthcare professionals, particularly pharmacists who are well-positioned to talk to their patients about safe medication use and storage," she said. "It is important to stay on top of a patient's depression, stay on top of their prescriptions and monitor suicidal ideation."

Providing medicine in blister packs has been successful in other countries in reducing deaths because it requires time and effort to remove enough of the drug for an overdose. And people can change their minds during that time.

Ultimately, Brown said, those at high risk for suicide with prescriptions for psychotropic drugs should be closely monitored for potential safety interventions.

Anxietycentre.com: Information, support, and therapy for anxiety disorder and its symptoms, including the latest anxiety research: Suicide Attempts Linked To Psychotropic Drug Prescriptions.