Stress Can Activate Past Fears 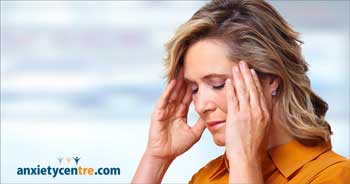 Have you noticed that as your body's stress elevates, some of your old fears can seem threatening again, or seem more threatening and dire than usual?

Even fears you once extinguished can resurface and seem threatening again.

We explain why this can happen in the Recovery Support area. Here is recent research that supports this phenomenon. You can read the press release for this research below:

Stress heightens fear of threats from the past

UNIVERSITY OF TEXAS AT AUSTIN

AUSTIN, Texas -- Recognizing threats is an essential function of the human mind -- think "fight or flight" -- one that is aided by past negative experiences. But when older memories are coupled with stress, individuals are likely to perceive danger in harmless circumstances, according to a paper published today in the Proceedings of the National Academy of Sciences.

The findings by researchers from Dell Medical School at The University of Texas at Austin, New York University and McGill University shed light on fear generalization, a core component of anxiety and stress-related disorders.

"The human mind uses cues to danger learned over time for self-defense, but certain circumstances can cause people to misidentify those cues," said Joseph Dunsmoor, lead study author and assistant professor of psychiatry at Dell Med. "Our research reveals that stress levels and the amount of time since an adverse event promote this type of overgeneralization."

Post-Traumatic Stress Disorder (PTSD) -- which affects about 8 million adults every year -- is one disorder characterized by the inability to discriminate threat from safety. Fear is triggered by harmless stimuli such as a car backfiring because they serve as reminders of trauma. By understanding how the mind identifies and responds to such triggers, scientists can develop better treatments for mental illnesses and disorders.

"These findings provide important laboratory data that helps explain why PTSD symptoms are often exacerbated during times of stress, and how repeated stress and trauma in the battlefield may lead to increased risk for PTSD," said Suzannah Creech, an associate professor of psychiatry at Dell Medical School, who was not involved in the study, but has spent her career working with veterans recovering from trauma.

"The research may help improve PTSD treatment outcomes for veterans in part by helping us understand how we may be able to prevent it in the first place," she said.

In the study, the researchers tested the effects of stress and time on a person's ability to correctly identify a cue associated with a negative outcome. Study participants heard two tones with one followed by a shock, set by the participant at the level of "highly annoying but not painful." Then, researchers played tones in the range of the two frequencies and gauged participants' expectations of shock by self-report and data on skin responses that indicate emotional arousal. When testing the range of tones, half of the participants were methodically primed to have higher cortisol levels through an arm ice bath, and half received a control arm bath with room temperature water.

When tested immediately after the initial shock, stress level did not significantly affect the participants fear of shock and accuracy in identifying the associated tone. However, when tested 24 hours later, stress level did heighten participants' fear response and negatively impacted their ability to identify the tone associated with shock. The group tested 24 hours later without raised cortisol levels only had slightly heightened fear responses and retained the ability to identify the associated tone.

"The effects of stress and memory on how humans generalize fear is largely unexamined," Dunsmoor said. "This study provides new data that will help us care for people with disordered patterns of fear and worry."

Anxietycentre.com: Information, support, and therapy for anxiety disorder and its symptoms, including how stress can activate past fears .