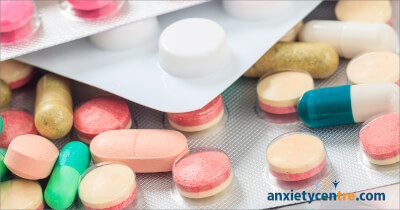 Prescriptions for SSRI antidepressant medications, often prescribed for anxiety disorder symptoms and depression, have almost doubled in England in the past 10 years.[1]

Data from NHS Digital show that 70.9 million prescriptions for antidepressants were given out in 2018.

In the U.S., about one in every 10 Americans takes an antidepressant, according to the government’s health statisticians.

However, research published in the peer-reviewed journal European Neuropsychopharmacology has found that some people, 2.7 percent who are being treated with selective serotonin reuptake inhibitors (SSRIs) antidepressants, have a greater tendency to commit violent crime.[2]

While the authors of the study note the work indicates an association (rather than cause and effect), and urge caution in how the findings are interpreted, previous research has found mental illness and violence are not closely associated, and especially if the mental illness is being treated.[3][4]

“Our results suggest there may be a need for clinical awareness of the risk for violence during and possibly after SSRI treatment across age groups,” said first author Tyra Lagerberg at the Department of Medical Epidemiology and Biostatistics, Karolinska Institutet, Stockholm.

Probably the most important takeaway from this research, lead author Professor Eduard Vieta (University of Barcelona) said, “The study also shows that past offenders were more likely to commit a violent crime during SSRI treatment: this in itself is an interesting finding, which could be the main focus of future research on the topic."

Certainly, more research is required to correctly determine cause and effect.

You can read the press release for this latest research below:


SSRI Antidepressants Associated With Increase In Violent Crime In Some Patients

by European College of Neuropsychopharmacology

Scientists have found that some people being treated with selective serotonin reuptake inhibitors (SSRIs) have a greater tendency to commit violent crime. In addition, this effect seems to continue for up to 12 weeks after stopping SSRI treatment. This work is published in the peer-reviewed journal European Neuropsychopharmacology, alongside a linked comment. The authors of both the paper and the comment note that the work indicates an association (rather than cause and effect), and urge caution in how the findings are interpreted.

First author Tyra Lagerberg at the Department of Medical Epidemiology and Biostatistics, Karolinska Institutet, Stockholm, said, "This work shows that SSRI (selective serotonin reuptake inhibitor) treatment appears to be associated with an increased risk for violent criminality in adults as well as adolescents, though the risk appears restricted to a small group of individuals. We don't claim that SSRIs cause the increased risk we see in our data. It is possible that the disorders that SSRIs are prescribed to treat, such as depression, are driving the association. In that case, our findings may mean that SSRIs are unable to fully remove this tendency toward violent crime, which is also a potentially important insight. Previous work has found an association between SSRI use and violence in young individuals, but not in adults. Ours is a much bigger study which allows us to confirm that there is an association in adults, as well."

The researchers examined the records of 785,337 people aged 15 to 60 years who were prescribed an SSRI in Sweden in 2006 through 2013. These patients were followed up for an average of around seven years, which included periods when individuals took SSRIs and when they did not. Individuals in the study were found to have committed 6,306 violent crimes while taking SSRIs, and 25,897 when not taking SSRIs.

After accounting for follow-up time and variables that were associated both with the probability of getting SSRI treatment and with the risk for violence, the researchers found that the risk of committing a violent crime was on average 26% higher during periods when individuals took SSRIs compared to periods when they did not, though only a small proportion of individuals went on to commit violent crimes regardless of treatment (<3% in the study sample). Due to the rarity of violent crimes, periods of SSRI medication are expected to coincide with only a small increase in the rate of this event. When the researchers subdivided the study follow-up according to time since start and end of SSRI treatment, they found that the risk for violent crime was higher throughout treated periods.

The increased risk also persisted for up to 12 weeks after the estimated end of SSRI treatment, after which the risk returned to levels before start of SSRI treatment. The researchers showed that the association between SSRI treatment and violent crime existed in young adults as well as in adults aged up to 60 years (the study did not investigate the association in adults older than 60 years). However, only 2.7% of individuals in the study committed violent crimes during the study period, meaning the increased risk applied to a small subgroup of SSRI users.

Tyra Lagerberg said, "Previous studies have shown that depression itself is associated with a three-fold increase in the risk for violent crime, and of course, many SSRIs are prescribed for depression; so it may be the underlying depression that causes the association with violent crime, rather than any effect of the SSRI. More work is needed to uncover the causes of this association.

"Our results suggest there may be a need for clinical awareness of the risk for violence during and possibly after SSRI treatment across age groups. However, a large majority of SSRI-users, around 97% in our sample, will not experience the outcome of violent crime, so our work needs to be understood in this context. Our findings do not affect the vast majority of people taking antidepressants and should not be used as basis for individuals to stop their SSRI treatment, nor for prescribers to withhold treatment from individuals who might benefit from it. Nevertheless, clinicians should be attentive when prescribing SSRIs to individuals with aggressive tendencies. More work is necessary to identify what further individual characteristics might give someone a higher risk of committing violent crimes during SSRI treatment, regardless of whether the risk is increased because of the SSRI or because of the underlying disorder that indicates an individual for treatment with these medications."

An associated commentary explores possible explanations for the increase. Lead author Professor Eduard Vieta (University of Barcelona) said, "This observational study presents a firm basis for further investigations on SSRI use and criminality. However, as the authors themselves say, we need to emphasise that the study shows an association between violent crime and SSRI use in a small subset of patients, it doesn't show that one causes the other. The study also shows that past offenders were more likely to commit a violent crime during SSRI treatment: this in itself is an interesting finding, which could be the main focus of future research on the topic."

Anxietycentre.com: Information, support, and therapy for anxiety disorder and its symptoms, including the latest anxiety research: .