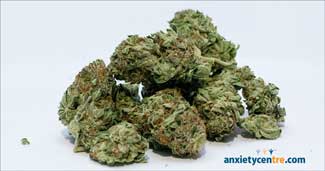 Marijuana use isn't harmless. Like all recreational drugs, marijuana creates its "high" by affecting brain function. These effects can adversely affect the brain in many ways, which can lead to increased risk of depression and suicide ideation recent research involving young adults has found.[1] This research is consistent with previous research on all age groups, including seniors.[2][3][4]

For the sake of your mental health, avoid recreational drugs!

You can read the research below:

Adolescent cannabis use has been linked to an increased risk of depression and suicidal behaviour in young adulthood, according to the first meta-analysis by a team of scientists at the Research Institute of the McGill University Health Centre (RI-MUHC) and McGill University, in collaboration with the University of Oxford and Rutgers University-Camden, which is published in the journal JAMA Psychiatry today.

The conclusions were reached by a team led by Dr. Gabriella Gobbi, a researcher in the Brain Repair and Integrative Neuroscience (BRaIN) Program of the RI-MUHC and a Professor of Psychiatry at McGill University's Faculty of Medicine, following a systematic review and meta-analysis of international studies comprising 23,317 individuals. The results reveal that cannabis use in adolescence could harmfully alter mental health, even in teenagers who did not report any depressive symptoms before starting cannabis.

Little attention has been paid to analyzing the impact of adolescent cannabis use on the risk of developing depressive symptoms and mood disorders on the adolescent brain, which is still under development until the age of 25.

The risk is particularly elevated in North America, where adolescents have higher rates of cannabis use compared to their peers in other developed countries. Canadian youth aged 15-25 constitute the majority of users of all ages (spanning 20-33 percent) while over 20 percent of adolescents in the United States report monthly use.

"The study suggests the diagnosis of depression in approximately seven percent of Canadians and Americans between the ages of 18-30 is attributable to cannabis, meaning 25,000 young Canadians and 400,000 young Americans suffer from depression because of earlier cannabis consumption," says co-author Dr. Nancy Mayo, a Professor in the Department of Medicine and School of Physical and Occupational Therapy at McGill University and a scientist at the Centre for Outcomes Research and Evaluation of the RI-MUHC.

Researchers reported instead a weaker association with anxiety.

The findings highlight the importance of prevention initiatives aimed at educating teenagers on the risks associated with cannabis use while teaching them skills to resist peer pressure.

"It is clear that a lot of young people consuming cannabis are at risk of developing depression and suicidal behaviour, so it is very important for authorities to be more proactive in campaigning for prevention," states Dr. Gobbi. "We hope the findings will spur public health organizations to apply preventative strategies to reduce the use of cannabis among youth."

Anxietycentre.com: Information, support, and therapy for anxiety disorder and its symptoms, including the latest in anxiety research: Marijuana Use Increases Risk Of Depression And Suicidal Behavior.

2. Serafini, Gianluca, et al. "The Association between Cannabis Use, Mental Illness, and Suicidal Behavior: What is the Role of Hopelessness?" Frontiers in Psychiatry, 11 Oct. 2013, https://www.ncbi.nlm.nih.gov/pmc/articles/PMC3795410/

4. Hallady, Jillian. “Sex Differences in the Association Between Cannabis Use and Suicidal Ideation and Attempts, Depression, and Psychological Distress Among Canadians.” Journal of Research in Crime and Delinquency, 27 Sept. 2018, journals.sagepub.com/doi/abs/10.1177/0706743718804542.