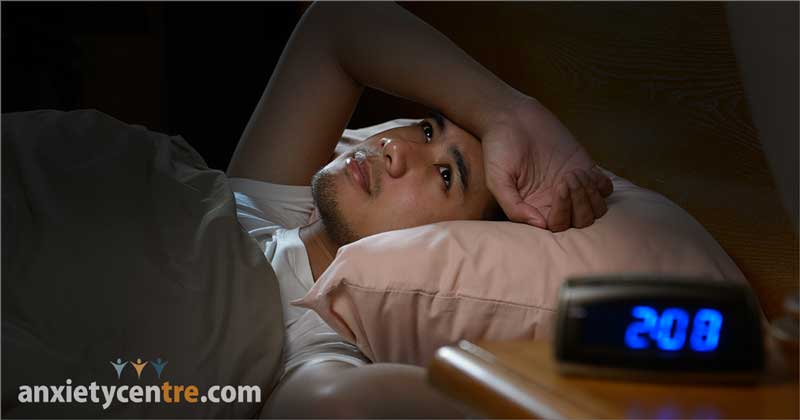 Sleep deprivation, such as by insomnia, can make anxiety and anxiety disorder symptoms worse.

New research has found that a lack of sleep can also interfere with overcoming fears.

Despite a few “Instinctive Fears” (threats the body automatically responds to, such as annihilation and pain and suffering), we learn most of our fears through experience.

For instance, the moment we become afraid of something – believe something could cause harm or unpleasantness – the brain “establishes” a fear.

Once a fear has become established, the fear center of the brain (amygdala and others) and the hippocampus (the learning and memory part of the brain) work together to “store” relevant information about the threat, such as the who, what, when, where, why, and the degree of threat so that the brain can alert us to a similar dangerous situation in the future should one occur.

Then, when the brain believes we are in a similar situation or circumstance, the fear center automatically triggers a stress response, alerts us to the possibility of danger, and reminds us of why we could be in danger.

This “establishing,” “storing,” “alerting,” and “reminding” is an important part of the body’s survival mechanism designed to keep us safe.

While we’re thankful for this automatic alarm system when in real danger, fear establishment can become a problem when we establish fears about things that aren’t truly dangerous.

Many anxiety disorder sufferers struggle with anxiety because they have established fears that aren’t genuinely threatening. The more fears established, the more of a problem anxiety becomes.

To overcome anxiety disorder and its many fears, we need to “extinguish” unnecessary fears so that the number of fears and their severities is dramatically reduced.

Thankfully we can extinguish unnecessary fears with professional help and effort.

Yes, we can teach the brain that some fears are no longer threatening. As the number of fears diminishes, so do issues with anxiety.

Sometimes the fear extinction process is quick, and sometimes it takes a great deal of time to convince the fear center that a fear is not necessary or wanted.

As the fear center learns a fear is no longer warranted, it stops alerting and reminding us when familiar situations or circumstances arise.

Recovery Support members can read more about the challenges of fear extinction in chapters 6 and 14.

While there are many challenges in extinguishing fears, recent research has identified another challenge.

Research, published by Elsevier in Biological Psychiatry: Cognitive Neuroscience and Neuroimaging, found a lack of sleep can inhibit fear extinction.

Since extinguishing fears requires memory reconsolidation – changing the beliefs associated with a memory – a lack of sleep, which reduces memory consolidation, can inhibit fear extinction.

Furthermore, sleep deprivation increases cortisol production the next day. Cortisol, a powerful stress hormone that stresses the body, stimulates the fear center, and suppresses the rationalization areas of the brain (prefrontal cortex and others).

These brain function changes increase fear detection and reaction while reducing our ability to calm ourselves and shut fear-messaging off.

Since the rationalization areas of the brain are responsible for the “anxiety brake” – the ability to shut off fear messages from reaching the fear center of the brain – a suppression of rationalization and an increase in fear activation would only reinforce fear memories rather than extinguishing them.

Finally, research has shown that heightened fear center activity due to stress has also been linked to making old fears seem stronger and more relevant.

Therefore, it’s understandable that a lack of sleep would impede fear extinction, especially when the above three factors are involved.

So, if you want to make the fear extinction process easier, get regular good sleep.

Regular good sleep not only enhances the memory reconsolidation process, it also reduces cortisol, which reduces fear center activity and all of its effects.

Recovery Support members can read more about memory reconsolidation, the effects of cortisol, and Limbic Lag in chapters 3, 6, 14, and 18.

Sleep is crucial for consolidating our memories, and sleep deprivation has long been known to interfere with learning and memory. Now a new study shows that getting only half a night's sleep -- as many medical workers and military personnel often do -- hijacks the brain's ability to unlearn fear-related memories. That might put people at greater risk of conditions such as anxiety or posttraumatic stress disorder.

The study appears in Biological Psychiatry: Cognitive Neuroscience and Neuroimaging, published by Elsevier.

The researchers, led by Anne Germain, PhD, at the University of Pittsburgh and Edward Pace-Schott, PhD, at Harvard Medical School and Massachusetts General Hospital, studied 150 healthy adults in the sleep laboratory. One third of subjects got normal sleep, one third were sleep restricted, so they slept only the first half the night, and one third were sleep deprived, so they got no sleep at all. In the morning, all the subjects underwent fear conditioning.

"Our team used a three-phase experimental model for the acquisition and overcoming of fearful memories while their brains were scanned using functional magnetic resonance imaging," said Dr. Pace-Schott. In the conditioning paradigm, subjects were presented with three colors, two of which were paired with a mild electric shock. Following this fear conditioning, the subjects underwent fear extinction, in which one of the colors was presented without any shocks to learn that it was now "safe." That evening, subjects were tested for their reactivity to the three colors, a measure of their fear extinction recall, or how well they had "unlearned" the threat.

Surprisingly, people who got no sleep lacked the brain activation in fear-related areas during fear conditioning and extinction. During the extinction recall 12 hours later, their brain activity looked more similar to those with normal sleep, suggesting that a limited night of sleep may be worse than none at all.

The researchers hypothesize that sleeping only half the night results in a loss of rapid eye movement (REM) sleep, which has been shown to be important for memory consolidation and usually happens toward the end of a normal sleep period.

Dr. Carter said the study used "noninvasive brain imaging to give us a novel window into how sleep deprivation disrupts the normal fear extinction mechanisms and potentially increases vulnerability to posttraumatic stress symptoms."

"Medical workers and soldiers often have curtailed or interrupted sleep rather than missing an entire night's sleep," Dr. Pace-Schott said. "Our findings suggest that such partially sleep-deprived individuals might be especially vulnerable to fear-related conditions such as posttraumatic stress disorder."

Anxietycentre.com: Information, support, and therapy for anxiety disorder and its symptoms, including the latest anxiety research: Lack Of Sleep Can Inhibit Fear Extinction.