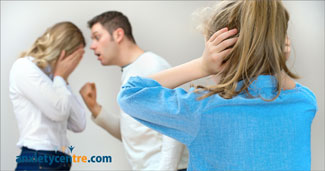 A common contributor to anxiety disorder and its signs and symptoms is feeling insecure in the world, which the person worries about. Worry is one of the most common underlying factors of anxiety disorder.

Parents: How you manage conflict has an impact on your kids

Few parents want their children to hear them arguing, but since conflict is a normal part of any relationship, it can be hard to shield little ones from every spat.

Kopystynska, a graduate student in the UA's Norton School of Family and Consumer Sciences in the College of Agriculture and Life Sciences, studies conflict and conflict resolution. In a new paper, forthcoming in the Journal of Family Psychology, she looks at how the way parents handle conflict with each other affects their parenting styles and how emotionally secure their children feel after being exposed to conflict between their parents.

Kopystynska's study focuses on constructive versus destructive styles of conflict management. In constructive conflict management, there is calmness and respect, despite a difference in opinion; the conflict stays focused on one topic; and progress is made toward a resolution. When conflict is handled destructively, there is anger and resentment, and the argument often strays off topic to things that may have happened in the past.

Kopystynska and her colleagues found that when even one parent handles conflict with a partner destructively, it can leave children feeling more emotionally insecure about their home life.

"Children are very good at picking up on little nuances of how parents interact with each other, so it really matters how parents express and manage their daily life challenges because that determines children's confidence in the stability and safety of their family," Kopystynska said. "If parents are hostile toward each other, even children as young as 3 years old may be threatened that their family may be headed toward dissolution. They may not necessarily be able to express their insecurities verbally, but they can feel it."

Kopystynska's study is based on national data collected for the Building Strong Families Project, which targeted low-income families -- a population that could be at high risk for conflict, given the many stressors associated with financial strife. Parents in the study were mostly unmarried and had just conceived their first child at the start of data collection, which was done in three waves.

Kopystynska focused on the third wave of data, collected when the children in the study were 3 years old. Mothers and fathers were surveyed at that point about their perceptions of their conflict management behaviors with each other, and how their children react emotionally when they witness conflict between their parents. While similar studies have relied only on data from mothers, the inclusion of fathers helps provide a more complete picture of what's going on, Kopystynska said.

The researchers further looked at supportive and harsh parenting behaviors, as measured through direct observations of each parent separately interacting with his or her child. Supportive behaviors might include making positive statements, being sensitive to the child's needs and engaging the child in cognitively stimulating ways. Harsh parenting might include forceful or intrusive behaviors or expressions of anger and dissatisfaction toward the child.

"What we found is that when parents are using constructive conflict management, the children feel less insecure about their family climate, and when at least one parent argues destructively, there are some levels of insecurity about the family relationships," Kopystynska said.

"There is often a belief out there that if you are a low-income family, you probably have a lot of dysfunction, but over 50 percent of the couples we looked at were arguing constructively," Kopystynska said. "Considering all the stressors they're dealing with, the majority of them still have a good, functional relationship, at least when it comes to conflict."

The fact that the group in which both parents were arguing in destructive ways was so small might help explain one surprising finding of Kopystynska's study -- that emotional insecurity levels were lowest for children of these parents. Also contributing to that finding could be the fact that those couples may have broken up and physically separated from each other by the time the data was collected, meaning that children may not have been as directly exposed to their parents' interactions, Kopystynska said.

"Parents who were in the concordant destructive group were less likely to stay together, so they were probably not in the same home, so children were probably not exposed to that interparental conflict," said Kopystynska, whose co-authors on the paper were UA faculty memebers Melissa Barnett and Melissa Curran, along with Katherine Paschall of the University of Texas, Austin.

In general, Kopystynska said, it's important for parents to be aware of how they interact with each other, and remember that conflict shouldn't necessarily be avoided but handled in a way that makes a child feel less threatened.

"Not all conflict is bad -- it's about how you manage it," Kopystynska said. "Given that children are going to encounter conflict out there in the real world, exposure to some conflict can be beneficial. However, it's really how parents handle that conflict that sets the tone for how safe children feel, and may further promote similar conflict management behaviors for when children are confronted with conflict of their own."

anxietycentre.com: Information, support, and coaching/counseling/therapy for problematic anxiety and its sensations and symptoms, including the latest in anxiety research about how parents handle conflict affects their children.