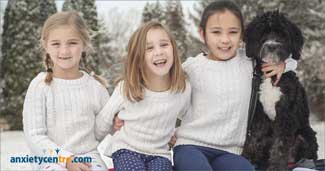 People who have fond memories of childhood, specifically their relationships with their parents, tend to have better health, less depression and fewer chronic illnesses as older adults, according to research published by the American Psychological Association.

"We know that memory plays a huge part in how we make sense of the world—how we organize our past experiences and how we judge how we should act in the future. As a result, there are a lot of different ways that our memories of the past can guide us," said William J. Chopik, Ph.D., from Michigan State University and lead author of the study. "We found that good memories seem to have a positive effect on health and well-being, possibly through the ways that they reduce stress or help us maintain healthy choices in life."

The findings were published in the journal Health Psychology.

Previous research has shown a positive relationship between good memories and good health in young adults, including higher quality of work and personal relationships, lower substance use, lower depression and fewer health problems, according to Chopik. He and his co-author, Robin Edelstein, Ph.D., from the University of Michigan, Ann Arbor, wanted to see how this would apply to older adults.

Also, much of the existing research focused on mothers and rarely examined the role of fathers in child development. Chopik and Edelstein sought to expand on the existing studies to include participants' reflections of their relationships with both parents.

The researchers used data from two nationally representative samples, the National Survey of Midlife Development in the United States and the Health and Retirement Study, with a total of more than 22,000 participants. The first study followed adults in their mid-40s for 18 years and the second followed adults 50 and over for six years. The surveys included questions about perceptions of parental affection, overall health, chronic conditions and depressive symptoms.

"The most surprising finding was that we thought the effects would fade over time because participants were trying to recall things that happened sometimes over 50 years ago. One might expect childhood memories to matter less and less over time, but these memories still predicted better physical and mental health when people were in middle age and older adulthood," said Chopik.

There was a stronger association in people who reported a more loving relationship with their mothers, noted Chopik, but that might change.

"These results may reflect the broader cultural circumstances of the time when the participants were raised because mothers were most likely the primary caregivers," said Edelstein. "With shifting cultural norms about the role of fathers in caregiving, it is possible that results from future studies of people born in more recent years will focus more on relationships with their fathers."

Chopik and Edelstein found that participants with positive childhood memories also had fewer chronic conditions in the first study of 7,100 people, but not in the second study of 15,200, making the results less straightforward.

anxietycentre.com: Information, support, and coaching/counseling/therapy for problematic anxiety and its sensations and symptoms, including the latest in anxiety research: Happy Childhood Memories Linked To Better Health Later In Life.