Fear Of The Unknown Common To Many Anxiety Disorders 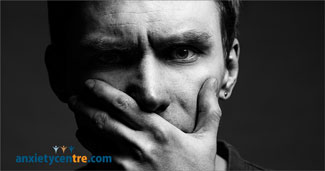 Many people who struggle with anxiety issues do so because they've come from backgrounds where they experienced trauma or saw or knew of someone who did. These types of experiences taught us that bad things can happen to anyone, including us, and at any time.

Moreover, many of us also grew up in homes where a parent(s) worried about and warned us of worst-case scenarios, which made us overly watchful and sensitive to danger and calamity. They did this to try and keep us safe, but being constantly warned of danger makes us hypersensitive to danger.

These types of backgrounds can set us up to be overly concerned of about the potential of future harm. Being concerned about the unknown is common to many anxiety disorders. It's the fear of "what if" - imagining the worst-case outcome - that is at the root of anticipatory anxiety.

All anxiety disorders are based on the notion of "what if" something can cause us serious harm and there's nothing we can do about it. And since anxiety disorder sufferers are typically highly creative, we can imagine all sorts of "worst-case scenarios" that can scare the daylights out of us, which is why the unknown - causing us to imagine the worst - is common to anxiety disorders.

Fortunately, we can replace worrisome, imagining-the-worst behavior with healthy behavior, which then solves the anxiety disorder problem. But doing so requires getting the right information, help, and support as we make healthy change. Yes, the process can be slow and challenging, but we can succeed in time. The work, however, is worth the reward of living a normal, anxiety disorder-free life. The sooner we do this work, the better off we are and the quality of our life experience.


Fear Of The Unknown Common To Many Anxiety Disorders

University of Illinois at Chicago

Several anxiety disorders, including panic disorder, social anxiety disorder and specific phobias, share a common underlying trait: increased sensitivity to uncertain threat, or fear of the unknown, report researchers from the University of Illinois at Chicago. The finding could help steer treatment of these disorders away from diagnosis-based therapies to treating their common characteristics.

"We may, one day, open up clinics that focus on treating the underlying common neurobiology of the patient's symptoms instead of individual diagnoses," says Stephanie Gorka, research assistant professor of psychiatry and a clinical psychologist in the UIC College of Medicine. "A treatment, or set of treatments, focused on sensitivity to uncertain threat could result in a more impactful and efficient way of treating a variety of anxiety disorders and symptoms."

Uncertain threat is unpredictable in its timing, intensity, frequency or duration and elicits a generalized feeling of apprehension and hypervigilance.

"It's what we call anticipatory anxiety," says Gorka, who is corresponding author on the study, published in the Journal of Abnormal Psychology. "It could be something like not knowing exactly when your doctor will call with test results."

When a person is sensitive to uncertain threat, they can spend the entire day anxious and concerned that something bad could happen to them, Gorka said. Panic disorder is one example -- patients are constantly anxious over the fact that they could have a panic attack at any moment, she said.

Predictable threat, on the other hand, produces a discrete fight-or-flight response that has a clear trigger, like a hungry bear coming at you, and it abates once the threat has resolved.

Previous research by Gorka and colleagues suggests that heightened sensitivity to uncertain threat may be an important factor that characterizes the fear-based internalizing psychopathologies, but most research focuses on panic disorder, so its role in the other fear-based disorders -- particularly social anxiety disorder and specific phobias -- remains unclear.

Gorka and her colleagues looked at data from participants who underwent a startle task in two different studies performed at UIC. The two studies, of participants ages 18 to 65, included 25 participants with major depressive disorder; 29 with generalized anxiety disorder; 41 with social anxiety disorder; and 24 with a specific phobia. Forty-one control subjects had no current or prior diagnoses of psychopathology.

The researchers measured the participants' eye-blink responses to predictable and unpredictable mild electric shocks to the wrist. To elicit blinking during the shock-task, the participants heard short, acoustic tones via headphones.

"No matter who you are or what your mental health status, you are going to blink in response to the tone," Gorka said. "It's a natural reflex, so everyone does it, without exception."

"We classify so many different mood and anxiety disorders, and each has its own set of guidelines for treatment, but if we spend time treating their shared characteristics, we might make better progress," said Dr. K. Luan Phan, professor of psychiatry and director of the mood and anxiety disorders research program and senior author on the study. "Knowing that sensitivity to uncertain threat underlies all of the fear-based anxiety disorders also suggests that drugs that help specifically target this sensitivity could be used or developed to treat these disorders."

Anxietycentre.com: Information, support, and therapy for anxiety disorder and its symptoms, including the latest in anxiety research about how fear of the unknown is common to many anxiety disorders.