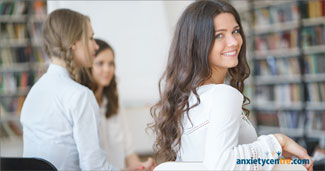 Cogntive Behavioral Therapy (CBT) - which has become an umbrella term for many modalities of "talk therapy," including metacognitive therapy (MCT) - has been established as the Gold Standard treatment for anxiety disorder and depression because of its successful track record. Up until 2011, anxiety disorder was thought to have been caused by a chemical imbalance in the brain.

But the "chemical imbalance" theory was disproven by independent research. As such, the need to "boost" the offending brain chemicals has fallen out of favor with behavioral therapists. Consequently, much research has been undertaken to evaluate the efficacy of "talk therapy" alone.

We have found "talk therapy" to be highly effective in overcoming anxiety disorder (including all of its forms). While we have seen great practical success using a "talk therapy" approach, the overwhelming success is now being verified by independent research. The research below is one example.

A Cure For Social Anxiety Disorders

The Norwegian University of Science and Technology (NTNU)

Social phobia is the most common anxiety disorder of our time. But the current treatment regimen for patients with this diagnosis has not proven very effective. Now a team of Norwegian and British researchers believe they have found a cure for social anxiety disorders.

"We've set a new world record in effectively treating social anxiety disorders," says Hans M. Nordahl, a professor of behavioural medicine at the Norwegian University of Science and Technology (NTNU). He has led a project with a team of doctors and psychologists from NTNU and the University of Manchester in England to examine the effects of structured talk therapy and medication on patients with social anxiety disorders.

"This is one of the best studies on social anxiety disorders ever," says Nordahl. "It's taken ten years to carry out and has been challenging both academically and in terms of logistics, but the result is really encouraging," he says.

To clear up some terms: social anxiety is not a diagnosis, but a symptom that a lot of people struggle with. For example, talking or being funny on command in front of a large audience can trigger this symptom. On the other hand, social anxiety disorder -- or social phobia -- is a diagnosis for individuals who find it hard to function socially, and anyone with this diagnosis has high social anxiety.

Medications, talk therapy or a combination of these are the most common ways to treat patients with this diagnosis. NTNU researchers set out to examine which of these approaches is most effective.

"A lot of doctors and hospitals combine medications -- like the famous "happy pill" -- with talk therapy when they treat this patient group. It works well in patients with depressive disorders, but it actually has the opposite effect in individuals with social anxiety disorders. Not many health care professionals are aware of this," says Nordahl.

"Happy pills," like selective serotonin re-uptake inhibitors (SSRIs), may have strong physical side effects. When patients have been on medications for some time and want to reduce them, the bodily feelings associated with social phobia, like shivering, flushing and dizziness in social situations tend to return. Patients often end up in a state of acute social anxiety again.

"Patients often rely more on the medication and don't place as much importance on therapy. They think it's the drugs that will make them healthier, and they become dependent on something external rather than learning to regulate themselves. So the medication camouflages a very important patient discovery: that by learning effective techniques, they have the ability to handle their anxiety themselves," says Nordahl.

The most common anxiety disorder experienced today is social anxiety disorder. It is a public health problem with major negative consequences for the individual and for society. Nearly twelve per cent of the population will be impacted during their lifetime.

Most affected individuals report that anxiety has significantly hampered their functioning at school and in their work life. These are issues that negatively affect their choice of career, entry into the labour market and how they adjust to their work environment. They are also a major cause of absenteeism.

People with social anxiety disorder dread situations where they risk being exposed to the critical gaze of others. They are afraid that others will look at them, judge them and form a negative opinion of them. They especially fear the embarrassment of being deemed nervous, weak or stupid.

Speaking in front of large groups, participating in parent meetings at school, and eating or writing with others watching can be problematic for people with the disorder. Some people are particularly afraid that others will see their hands or voice shake, or that they are blushing and sweating. They will do their best to avoid these types of situations.

They may also resort to various coping strategies to hide their anxiety, which unfortunately only reinforce the problem.

Cognitive therapy is a treatment where the therapist works to get patients to accept their fear, to go into challenging situations and to shift their attention to what they want to say and do in those situations. In other words: Accept inwardly and focus outwardly.

NTNU researchers set up the project to compare the most recognized methods for treating social anxiety disorders. Well over 100 patients participated in the study and were divided into four groups.

During treatment and right afterwards, the patients in groups two and three were managing equally well. But after a year, it was clear that the group two participants -- those who had only received cognitive therapy -- fared the best.

Only with the help of cognitive therapy have researchers managed to increase the recovery rate in patients with social anxiety disorders by 20 to 25 per cent, as compared with the norm for this group.

"This is the most effective treatment ever for this patient group. Treatment of mental illness often isn't as effective as treating a bone fracture, but here we've shown that treatment of psychiatric disorders can be equally effective," says Nordahl.

Many patients don't get adequate treatment

Torkil Berge is a psychologist at Diakonhjemmet Hospital in Oslo and head of the Norwegian Association for Cognitive Therapy. He says social anxiety disorder is a public health problem with major negative consequences for the individual and for society. Nearly twelve per cent of the population will be affected by this illness during their lifetime.

"This is a hidden disorder, and many patients find it difficult to communicate their struggle to their healthcare providers. Thousands upon thousands of individuals end up not receiving adequate treatment. Of those who do get treatment, most are probably offered drug therapy," Berge says.

"I can well imagine that the combination of drug therapy and cognitive therapy isn't the best approach, as NTNU researchers have determined in this study," he said.

Nordahl and the rest of the research team have also worked to improve standard cognitive therapy. They have added new processing elements, which have shown greater effectiveness.

"We're using what's called metacognitive therapy, meaning that we work with patients' thoughts and their reactions and beliefs about those thoughts. We address their rumination and worry about how they function in social situations. Learning to regulate their attention processes and training with mental tasks are new therapeutic elements with enormous potential for this group of patients," says Nordahl.

Anxietycentre.com: Information, support, and therapy for anxiety disorder and its symptoms, including the latest in anxiety research that CBT Is Considered A Cure For Social Anxiety Disorder.