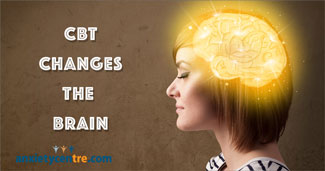 A new study from King's College London and South London and Maudsley NHS Foundation Trust has shown that cognitive behaviour therapy (CBT) strengthens specific connections in the brain. This is the first time research has proven what therapists have known for years - that talk therapy provides real results.

The research, which was on people with psychosis, a more severe form of psychiatric disorder, shows that even severe forms of mental illness can benefit from CBT. And these benefits can be lasting.

The Kings College press release states:
“CBT - a specific type of talking therapy - involves people changing the way they think about and respond to their thoughts and experiences. For individuals experiencing psychotic symptoms, common in schizophrenia and a number of other psychiatric disorders, the therapy involves learning to think differently about unusual experiences, such as distressing beliefs that others are out to get them. CBT also involves developing strategies to reduce distress and improve wellbeing.

“The findings, published in the journal Translational Psychiatry, follow the same researchers' previous work which showed that people with psychosis who received CBT displayed strengthened connections between key regions of the brain involved in processing social threat accurately.

“The new results show for the first time that these changes continue to have an impact years later on people's long-term recovery.

“In the original study, participants underwent fMRI imaging to assess the brain's response to images of faces expressing different emotions, before and after six months of CBT. Participants were already taking medication when they took part in the study, and so were compared to a group receiving medication only. The group receiving medication only did not show any increases in connectivity, suggesting that the effects on brain connections could be attributed to the CBT.

“For the new study, the health of 15 of the 22 participants who received CBT was tracked for eight years through their medical records. They were also sent a questionnaire at the end of this period to assess their level of recovery and wellbeing.

“Lead author of the study Dr Liam Mason from King's College London, who is a clinical psychologist at the Maudsley Hospital where the research took place, said: "This research challenges the notion that the existence of physical brain differences in mental health disorders somehow makes psychological factors or treatments less important. Unfortunately, previous research has shown that this 'brain bias' can make clinicians more likely to recommend medication but not psychological therapies. This is especially important in psychosis, where only one in ten people who could benefit from psychological therapies are offered them."

“The researchers now hope to confirm the results in a larger sample, and to identify the changes in the brain that differentiate people who experience improvements with CBT from those who do not. Ultimately, the results could lead to better, and more tailored, treatments for psychosis, by allowing researchers to understand what determines whether psychological therapies are effective.”

This research confirms what CBT therapists have known for decades - talk therapy works and can provide lasting results. This is especially true for milder mental disorders, such as anxiety disorder, depression, intermittent explosive disorder (aggressive issues), anger disorder, early childhood trauma, and so on.

This is the first time research has confirmed ‘why’ CBT works – because it does cause the brain to change in healthy ways. And these changes can be lasting.

This is one of the reasons earlier research has shown that CBT is the ‘Gold Standard’ treatment for anxiety and depression…because when you address the cause of the problem (learned unhealthy behavior), the problem and its symptoms disappear.

Hopefully, the results of this research will finally filter down to the medical and mental health communities, and especially those who still believe in the 'chemical imbalance' myth for many mental health disorders, which was completely debunked in 2011.

As more and more people realize that anxiety and depression are reversible via CBT, and that they aren’t caused by some brain ‘imbalance,’ it will help to destigmatize these disorders, which will allow more people to seek help in a nonjudgmental society. And the more people who seek help, the healthier our overall society.

No one needs to suffer needlessly. The road to success is well known and well traveled. Our recommended anxiety disorder therapists can help you succeed, as well. Talk therapy works and does provide lasting change. Therefore, there is no good reason to remain stuck in a struggle with problematic anxiety and/or depression. You can overcome them, too, like so many people before you.

Anxietycentre.com: Information, support, and therapy for anxiety disorder and its symptoms, including the latest in anxiety research: CBT Changes The Brain..