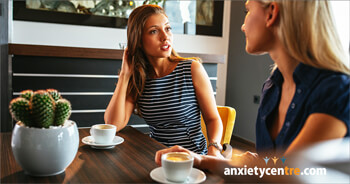 Therapy Is Best In The Morning When Cortisol Is High

Stress hormones, such as the powerful cortisol, are often viewed as being "bad" because they are associated with stress, fear, and anxiety symptoms.

But stress hormones, such as cortisol, can be advantageous because they increase attention, facilitate memory retention, and boost alertness, all beneficial for learning.

It's little wonder that a recent study found patients with anxiety, phobias and fears showed greater improvement from therapy that was scheduled in the morning, when levels of cortisol – a naturally occurring hormone – tested higher.

Patients make more progress toward overcoming anxiety, fears and phobias when their therapy sessions are scheduled in the morning, new research suggests.

The study found that morning sessions helped psychotherapy patients overcome their panic and anxiety and phobic avoidance better, in part, because levels of cortisol -- a naturally occurring hormone -- are at their highest then, said clinical psychologist Alicia E. Meuret, Southern Methodist University, Dallas.

"The hormone cortisol is thought to facilitate fear extinction in certain therapeutic situations," said Meuret, lead author on the research. "Drugs to enhance fear extinction are being investigated, but they can be difficult to administer and have yielded mixed results. The findings of our study promote taking advantage of two simple and naturally occurring agents - our own cortisol and time of day."

The findings were reported in the article "Timing matters: Endogenous cortisol mediates benefits from early-day psychotherapy" in the journal Psychoneuroendocrinology.

The study taps into research that anxiety and phobias are best treated by learning corrective information. Patients with anxiety and phobic disorders will overestimate the threat that a sensation or situation can cause. But by direct exposure, a patient learns that the likelihood of an expected catastrophe is very low.

"For example, a patient may think that standing in an elevator could cause him or her to lose control or faint, suffocate, or may create physical symptoms that would be intolerable," Meuret said. "By having them stand in an elevator for a prolonged time, the patient learns that their feared outcome does not occur, despite high levels of anxiety. We call this corrective learning."

However, since not all patients benefit equally from exposure therapy, researchers seek to identify ways to enhance corrective learning. To date, no simple way to augment fear extinction has been established.

The hormone cortisol is thought to help the extinction of fear. It appears to suppress the fear memory established by earlier distressing encounters while at the same time helping a patient better absorb and remember the new corrective information.

"In a prior study, we have shown that higher levels of cortisol during and in anticipation of exposure facilitate corrective learning," said Meuret, an associate professor in the SMU Psychology Department and director of the SMU Anxiety and Depression Research Center in the Clinical Psychology Division of the department. "We also know that cortisol is higher early in the day. But we did not know whether cortisol would act as a mediator between time of day and therapeutic gains. This is what our study investigated."

Participants in the study were 24 people diagnosed with panic disorder and agoraphobia, which is a fear of public places where a person feels panicked, trapped or helpless.

For the study, participants underwent a standard psychotherapeutic treatment of "exposure therapy," in which patients are exposed to situations that can typically induce their panic or fear with the goal that repeated exposure can help diminish a disabling fear response over time.

Patients received weekly sessions over three weeks, each lasting, on average, 40 minutes. Exposure situations included tall buildings, highways and overpasses, enclosed places such as elevators, supermarkets, movie theaters, and public transportation such as subways and intercity trains and boats. In addition, levels of cortisol were measured at various times during each exposure session by swabbing inside the mouth for saliva.

In the session following exposure, the researchers measured patients' appraisals of the threats, their avoidance behavior, how much control they perceived themselves as having, and the severity of their panic symptoms.

Assessing the results from those measurements, the researchers found the exposure therapy in general resulted in significant improvements in all measures over all time periods.

Biggest gains after sessions that started earlier in the day

However, patients made the biggest gains in overcoming their fears after the sessions that started earlier in the day. At the next session, patients reported less severe symptoms for threat misappraisal, avoidance behaviors and panic symptom severity. They also perceived greater control over their panic symptoms.

"Notably, higher cortisol was related to greater reductions in threat appraisal, perceived control and panic symptom severity at the next session," Meuret said, "and that was the case over-and-above the effects of time-of-day, with large effect sizes."

That finding suggests that cortisol accounts for some of the therapeutic effects associated with time-of-day, she said.

Because cortisol levels are generally higher in the morning, the authors speculate that higher cortisol levels may aid extinction learning, and contribute to enhanced early-day benefits of exposure sessions through such a mechanism.

However, Meuret cautioned that the precise mechanism by which cortisol enhances the effectiveness of morning exposure sessions remains unclear and can't be directly addressed from the data in this study. The sample size of the study was small and findings need to be confirmed independently in larger studies, she said.

Meuret and her team suspect additional mechanisms are at play to explain the time-of-day effect. Other factors could include memory and learning and the body's natural circadian rhythm, quantity and quality of sleep, attention control, and interactions between those factors and others.

Anxietycentre.com: Information, support, and therapy for anxiety disorder and its symptoms, including the latest in anxiety research: Anxiety Therapy Sessions Best In The Morning.