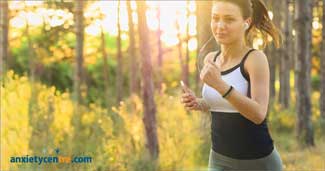 The efficacy of exercise in decreasing symptoms of depression has been well established.[1][2][3] Many studies have found exercise to be as effective as antidepressants in the treatment of depression, including major depressive disorder.

If you are struggling with depression or major depression, rather than taking medication, you might find it equally beneficial, or more so, to embark on a regular aerobic exercise routine. As mentioned, regular exercise, which includes aerobic exercise, has repeatedly shown to be an effective antidepressant.

NOTE: Always consult your doctor before starting an exercise routine if you haven't maintained exercise as part of your normal lifestyle routine.

You can read the press release of this recent research below:

An analysis of randomized controlled clinical trials indicates that supervised aerobic exercise has large antidepressant treatment effects for patients with major depression. The systematic review and meta-analysis is published in Depression and Anxiety.

Across 11 eligible trials involving 455 adult patients (18-65 years old) with major depression as a primary disorder, supervised aerobic exercise was performed on average for 45 minutes, at moderate intensity, 3 times per week, and for 9.2 weeks. It showed a significantly large overall antidepressant effect compared with antidepressant medication and/or psychological therapies.

Subgroup analyses revealed comparable effects for aerobic exercise across various settings and delivery formats, and in both outpatients and inpatients regardless of symptom severity.

Anxietycentre.com: Information, support, and therapy for anxiety disorder and its symptoms, including the latest in anxiety research: Aerobic Exercise An Effective Antidepressant.