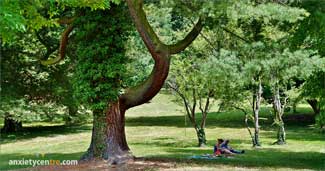 All of us at anxietycentre.com are proponents of using natural strategies to reduce and overcome issues with anxiety, depression, and unhealthy stress. Spending time in nature is one such strategy that can produce significant benefits, and it’s relatively cost effective with no adverse side effects (as long as you keep yourself safe when in nature).

I believe most of us know that spending time in nature reduces anxiety, depression, and stress. Recent research has qualified that knowledge.

Research[1] published in Frontiers In Psychology in 2014 noted:

Proximity to greenspace has been associated with lower levels of stress (Thompson et al., 2012)[2] and reduced symptomology for depression and anxiety (Beyer et al., 2014).[3]

A recent epidemiological study has shown that people who move to greener urban areas benefit from sustained improvements in their mental health (Alcock et al., 2014).[4]

"We've known for a long time that visiting parks is good for our health, but we are now beginning to establish exactly how much time we need to spend in parks to gain these benefits," he said.

"We have specific evidence that we need regular visits of at least half an hour to ensure we get these benefits."

"We know that spending time in nature reduces stress, but until now it was unclear how much is enough, how often to do it, or even what kind of nature experience will benefit us," says Dr. MaryCarol Hunter, an Associate Professor at the University of Michigan and lead author of this research. "Our study shows that for the greatest payoff, in terms of efficiently lowering levels of the stress hormone cortisol, you should spend 20 to 30 minutes sitting or walking in a place that provides you with a sense of nature."

"Healthcare practitioners can use our results as an evidence-based rule of thumb on what to put in a nature-pill prescription," says Hunter. "It provides the first estimates of how nature experiences impact stress levels in the context of normal daily life. It breaks new ground by addressing some of the complexities of measuring an effective nature dose."

The data revealed that just a twenty-minute nature experience was enough to significantly reduce cortisol levels. But if you spent a little more time immersed in a nature experience, 20 to 30 minutes sitting or walking, cortisol levels dropped at their greatest rate. After that, additional de-stressing benefits continue to add up but at a slower rate.

These aren’t the only studies that found spending time in nature benefits mental health. There are numerous others.

So, spending time in nature is scientifically proven to reduce anxiety, depression, and stress hormone levels, which can be an important tool when working to overcome anxiety disorder and its symptoms.

Spending time in nature can be an important strategy for long-term good mental and physical health.

anxietycentre.com: Information, support, and coaching/counseling/therapy for problematic anxiety and its sensations and symptoms, including the latest in anxiety research: 20 – 30 Minutes In Nature Reduces Anxiety, Depression, and Stress.