Underlying Factors: The Cause Of Apprehensive Behavior 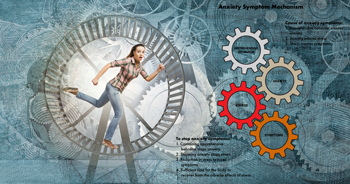 Why do anxious people think apprehensively and others don’t?

Everyone thinks apprehensively from time to time. This is normal.

Apprehensiveness is supposed to motivate us to take action to avoid harm. It’s an important part of the body’s built-in survival mechanism. There are many instances where apprehensive behavior is necessary and welcome.

It’s not that apprehensive behavior is bad or unwanted. It serves a useful purpose in the right situation and circumstance.

Apprehensive behavior becomes a problem, however, when we’re apprehensive too often and in situations and circumstances that normally don’t justify it.

Unhealthy apprehensive behavior is caused by underlying factors: the unhealthy behaviors (thoughts and actions), situations, and circumstances that motivate a person to behave apprehensively.

What causes the underlying factors?

Research has shown that anxiety disorder runs in families.[1] Some suggest it’s because of a genetic predisposition, others suggest it’s because of environmental factors, and still others believe it’s the combination of the two. Because there is still much to learn about the role of genes in behavior, we’re going to let the “nature versus nurture” debate rage on. It’s likely that debate won’t be settled any time soon.

Research clearly shows that we learn apprehensive behavior from those who raise us (parent-to-child pathway)[2] or in response to early life experiences, such as trauma,[5] neglect,[13] maltreatment,[14] and abuse.[3][14]

This isn’t surprising since the majority of the beliefs and behaviors we form are developed by the age of 8, and most of them are heavily influenced by those who raise us and the experiences we have while growing up.

At a very early age we already have most of our beliefs and behaviors developed and habituated (formed as habits). Then, we use those behaviors and habits as adults.

Our early life experiences greatly shape how we interact and cope with life.

For example, children who weren’t abused while growing up generally interact and cope with life in healthy ways because their life experience has shown that life is generally safe and you can trust most people. As they go about life, they aren’t anxious because they’ve learned there’s usually nothing to be anxious about, which keeps anxiety within a normal and healthy range.

Children who experienced abuse when growing up, however, often behave apprehensively as adults because they learned that life can be dangerous and sometimes that danger can cause significant harm. Consequently, they interact and cope with life in overly anxious ways because of their heightened awareness of danger and harm.

Even though the abuse might have occurred at an early age, the reality of that situation left indelible marks on their System Of Beliefs, which still influences the behavior they use as adults.

Moreover, people who were abused also have trust issues, which is understandable since their trust was violated when they were most vulnerable, and often by those they SHOULD have been able to trust. Knowing that they can’t trust anyone for fear of being harmed, especially by those they should trust most, creates an anxious way of coping with life in general.

In this case, it’s not that anxiety is being caused by a genetic problem or a malfunctioning brain, but that they learned life can be dangerous and even in settings where people would normally feel safe.

This ongoing surveillance for danger creates anxiety, and that anxiety stresses the body. Chronic stress can cause chronic symptoms.

Once beliefs about danger and trust become part of our System Of Beliefs, those beliefs influence our behaviors throughout the rest of our lives (unless we deliberately work to change those beliefs and behaviors).

Typically, the beliefs we learn as children influence the automatic behaviors we use as adults.

This is just one example of a multitude of ways underlying factors develop and then motivate apprehensive behavior.


Behaviors Stem From Our System Of Beliefs and Underlying Factors

Experiencing abuse when growing up is often linked to the development of the following underlying factors:

Coming from an environment where one or both parents were over critical often produces the following underlying factors:

Being raised in an environment where one or both parents abandoned you often produces these underlying factors:

These are just a few of the many, many causes and resulting underlying factors that lead to the development of anxiety disorder (and other mental health disorders).

The more environmental factors you have in your background, the more complex the mix of underlying factors.

For instance, if you were abused when growing up and had parents who were over critical of you and abandoned you, all of the above underlying factors could be involved.

The Conclusions We Make About Life Shape Our System Of Beliefs

This is why one family member can develop anxiety disorder while another doesn’t.

For instance, an older sibling might not develop anxiety disorder because his circumstance when growing up was different than yours who came along a few years later. Or, your parents treated a younger sibling different than they did you. Or, one sibling was abused and another wasn’t. Or, both parents were together when raising the older children but separated when raising the younger ones. Or, you experienced an early life trauma when your other siblings didn’t. And so on.

As you can imagine, there are a great many variables that can influence the development of anxiety disorder.

Our System Of Beliefs Shape Our Underlying Factors

The conclusions and opinions we use to shape our System Of Beliefs also shape our underlying factors.

For instance, if you came from a background where one or both parents were over critical of you, you might have concluded you were inferior in some way because you could never measure up to their expectations. This conclusion often leads to low self-esteem.

Furthermore, believing you are inferior often leads to people-pleasing. People-pleasing frequently leads to unhealthy relationships that are fueled by the fear of doing something wrong and then being rejected and abandoned.

In this case, an element in our System Of Beliefs (feeling inferior) motivated the development of underlying factors (low self-esteem, people-pleasing) that resulted in apprehensive behavior (fear of rejection, fear of abandonment).

This is just one example of how our System Of Beliefs shapes underlying factors that motivate apprehensive behavior.

Our Underlying Factors Influence Our Behaviors

Here’s a simplified overview of how all of this fits together: 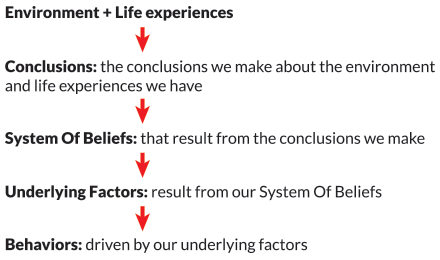 As an example, when a child is emotionally neglected by her parents, the child concludes she is not worthy of love (children arrive at conclusions based on their understanding of the world). Rather than concluding her parents have emotional problems, which is why they are neglecting her, she thinks it’s her fault.

Then, that belief – “I’m not worthy of love” – becomes a part of her System Of Beliefs. That belief creates the underlying factors of low self-esteem and unworthy of love that then drives her behavior in everything she does.

We can illustrate this chain of events as: 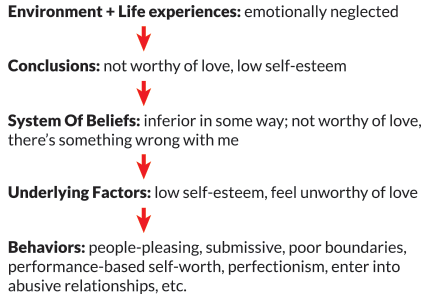 In this example, her early life experience led to the conclusions that became a part of her System Of Beliefs, that then motivated her behavior.

This is just one example of how a chain of events can lead to the development of apprehensive behavior.

There are hundreds (if not thousands) of ways the environments we grow up in can lead to the development of underlying factors that create issues with anxiety.

It’s not that anxiety is beyond our control, but that the mechanism that leads to anxiety disorder is often subconscious due to habituation. In fact, most anxiety disorder sufferers initially have no idea why they are struggling with anxiety issues.

Again, it’s not that there aren’t good reasons why we develop issues with anxiety, but that many people aren’t aware of those reasons and how they all lead to the development of anxious behavior.

When people say anxiety isn’t a choice, as far as they are concerned, that’s true. But in reality, anxiety is a choice. They just aren’t aware of why they are choosing to be anxious.

So, anxiety isn’t “bad,” an “illness,” or “disease.”  It’s a natural response to the perception of danger.

Anxiety becomes a “disorder” when we behave anxiously too often and in situations and circumstances that don’t warrant it. This is learned behavior that stems from the environments and backgrounds we grow up in.

Since apprehensive behavior is learned, we can learn healthy ways of interacting and coping with life.

Since anxiety disorder is caused by underlying factors, addressing them requires doing cognitive and behavioral work. It’s work we can do with the right help, support, and effort.

We Have To Address The Underlying Factors Of Anxiety

To truly overcome anxiety disorder, we need to address the core of the problem: the underlying factors that influence anxious behavior. As we identify and successfully address our underlying factors, they stop motivating apprehensive behavior and overall healthy change is made.

When you address the cause of the problem – the underlying factors – you eliminate the problem and its symptoms – overly apprehensive behavior and a chronically stressed body.

Recovery Support members can read about the many underlying factors and core fears in Chapter 7.

Why Therapy Is Effective In Overcoming Issues With Anxiety

As you most likely surmised, working with an experienced therapist, and one who truly understands the many underlying factors of anxiety and how to overcome them, is the most effective way to overcome anxiety disorder.

While self-help materials can be beneficial, working with an experienced anxiety disorder therapist can get to the real issues that cause anxiety rather than just addressing the behaviors that stem from the underlying factors.

Unless you are specifically trained in anxiety disorder resolution at the underlying factor level, it’s unlikely you’ll know what your underlying factors are, their mix, and how to resolve them.

Unfortunately, many people spend years trying to self-help themselves only to discover they are still struggling years later. This is unfortunate because working with an experienced anxiety disorder therapist could have resolved that struggle rather than still struggling so many years later.

We are passionate about helping people overcome anxiety disorder (and other mental health disorders) because we know it can be done and how to achieve success. Because we also struggled with anxiety disorder and have overcome it, we know the joy and freedom of success. It’s our desire to see others gain a life of anxiety disorder-free living, as we have.

Anxietycentre.com is the outpouring of our passion and commitment to helping others.

4. Aktar, E and Bogels, SM. "Exposure to Parents' Negative Emotions as a Developmental Pathway to the Family Aggregation of Depression and Anxiety in the First Year of Life." Clinical Child and Family Psychology Review, 20 Dec. 2017.

13. Rehan, Wail, et al."Experiences of severe childhood maltreatment, depression, anxiety and alcohol abuse among adults in Finland." PLoS One, 8 May 2017.