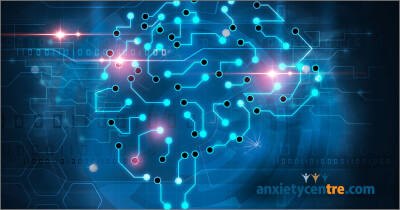 What is a System Of Beliefs and how does it relate to anxiety disorder?

Anxiety is caused by apprehensive behavior.

Behavior is defined as: the way a person thinks and acts.

Apprehensive is defined as: fearful that something bad or unpleasant will happen.

If anxiety is caused by apprehensive behavior, what causes a person to behave apprehensively?

To answer this question, we need to provide a little background.

Humans are learning machines. In fact, at approximately 10 weeks after conception when the brain starts to develop, humans begin learning.[1][2]

We can learn at a very fast rate, especially during our early developmental years. This learning shapes the person (character and personality) we become AND determines how we behave.

As we process information from our inner self (thought-life), what we observe, what we feel (in and on the body) through our senses, and from the outer world (the environments we live in, and the people, situations, and circumstances we encounter and interact with), we shape our System Of Beliefs (SOB).

For simplicity sake, our SOB can be organized into three main categories:

Each of these main categories contains subcategories, which we address in a moment.

Depending on the source, there can be many more main categories and subcategories that make up our SOB. But for this explanation, we’re only going to use these three.

Values – values are the notions of good and bad/right and wrong. In the Values category, we have two subcategories called ‘Good/Right’ and ‘Bad/Wrong.’

Beliefs – beliefs are the notions of true and false. In the Beliefs category, we have two subcategories called ‘True’ and ‘False.’

Attitudes/Preferences – attitudes/preferences are the notions of like and dislike. In this category, we also have two subcategories. They are called ‘Like’ and ‘Dislike.’

These main categories can be illustrated as: 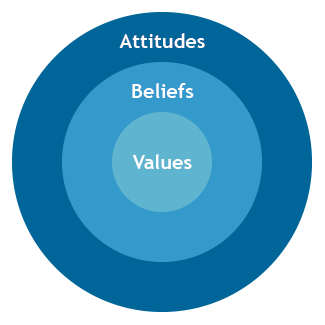 NOTE: For the sake of brevity, from this point on we’re going to use Preferences rather than Attitudes/Preferences.

After the brain starts to develop, we begin processing information, arriving at conclusions, and sorting these conclusions into the three main categories of values, beliefs, and preferences. Each conclusion we make is “filed” into the respective category and subcategory. These conclusions form our System Of Beliefs (SOB).

Here is an example of how that might unfold:

Research has shown that unborn children can recognize the voice of their mother and of those who spend time talking to them or their mother while they are in the womb. Unborn babies recognize voices and make associations with them as part of the processing, attribution, and memory process. When the child is born, the child knows the familiar voice as demonstrated by the child turning their head toward the familiar voice while not responding to voices that are unfamiliar.

My (Jim Folk) wife and I witnessed this first hand. When our youngest daughter had her twin boys, the moment she spoke to her first born, he turned his head toward her showing that he knew and felt safe with her and favored her interaction. But when anyone else spoke to him, he didn’t turn his head or show favor.

In this case, while in the womb, he learned that his mother’s voice was “Good,” and therefore, responded favorably to it. This conclusion and its related conclusions were filed into his developing SOB - in the Values category as “Good,” the Beliefs category as “True,” and the Preferences category as “Like.” From these conclusions, he behaved (thought and acted) accordingly.

So even in the womb humans are learning and developing their SOB.[3][4]

The process of constructing our SOB is even clearer when you watch children grow and develop. Very soon after they are born, they will let you know what they want; when they are uncomfortable, hungry, tired, and desiring to be comforted; and so on. All of these behaviors demonstrate that processing has been and is going on, which results in the type of behavior they exhibit. This processing, categorizing, and drawing upon information continues throughout our lives.

Our SOB is constructed based on the conclusions we make about our life experience. Those conclusions influence our behavior.

As we grow and develop, every thought we have is filtered through and influenced by our SOB. This process can be illustrated as: 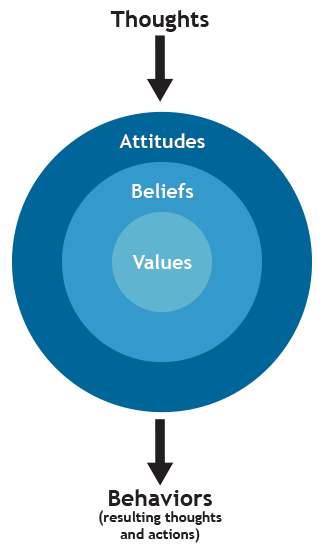 Humans shape and modify their SOB as an ongoing process. There are, however, a few considerations to keep in mind:

Values - the notions of good and bad/right and wrong, once determined, are difficult to change. While we CAN change them, most often lasting change requires a lot of perseverance and repetition to achieve.

Beliefs – the notions of true and false are still resistant to change but are easier to change than values.

Preferences – the notions of like and dislike are the easiest to change. In fact, we change them whenever we want.

Here are some examples:

If you grew up in a home where you were taught murder is wrong, most likely you’ll believe that murder is wrong - that conclusion would form part of your SOB in the Values category.

If you grew up in a family that taught all humans are equal - and if you believed that was true - that belief would become a part of your SOB in the Beliefs category.

If you liked the taste of vanilla ice cream over chocolate ice cream, that conclusion would become a part of your SOB in the Preferences category. Whenever you were served ice cream and had a choice between vanilla and chocolate, you’d most likely choose vanilla because that’s the one you’ve learned to prefer.

These are just three examples of a multitude of conclusions you could make that would then populate your SOB with information, which you would draw on to make decisions with, and then act upon.

If someone challenged your views about murder, most likely your conclusion wouldn’t change unless you were presented with a strong case to change that conclusion. For most people, it would have to take a lot of convincing to change this Value.

If someone challenged your Belief about all humans being equal, that would still require a lot of convincing. But, it wouldn’t require as much convincing as it takes to change a Value.

If someone challenged your preference for an ice cream flavor, however, it wouldn’t require much convincing. All the person would need to do is give you a flavor you liked better than vanilla.

It’s worth noting that all of the above – Values, Beliefs, and Preferences – are constructed from the conclusions we make about life. Therefore, our SOB is based on personal opinions, not necessarily facts. Yes, we could have used facts to form our opinions, but opinions are formed for a variety of reasons with facts and experiential evidence as being only a small part of the equation. It also depends on what a person’s preferences are for believing something. While some people place great value on facts and evidence, others place a greater value on feelings or what they want to believe regardless of the facts and evidence. For example, there are some individuals who have a belief that it is wrong to go against what their family of origin believes, so no amount of facts or evidence will change their opinion.

Our Values, Beliefs, and Preferences are based on our opinions of life. Those opinions can be arrived at in a variety of ways, and even subconsciously.

Values, Beliefs, and Preferences aren’t hardwired into our DNA. They are opinions based on the conclusions we make about life as we experience it. Certainly, the environment we grew up in plays a major role in the experiences we have and the conclusions we draw. Nevertheless, our entire SOB is made up of personal opinions. These “opinions” influence how we behave.

NOTE: The vast majority of people run on “autopilot” where their thoughts and actions are driven by habituated subconscious patterns rather than by deliberate conscious actions. A very small percentage of people become aware of how they form beliefs and how those beliefs influence behavior. Typically, this process only becomes more obvious when working with a therapist to make behavioral change.

Now that we have this foundation, next we talk about beliefs and anxiety disorder - and how beliefs drive anxious behavior.

Recovery Support members can read Chapter 5 for more in-depth information about our System of Beliefs and how they influence behavior.

anxietycentre.com: Information, support, and coaching/counseling/therapy for problematic anxiety and its sensations and symptoms, including information about System of Beliefs and how it relates to anxiety disorder.

2. “While in Womb, Babies Begin Learning Language from Their Mothers.” University of Washington News.