Barriers To Overcoming Anxiety Disorder: Being Unaware You Have Issues With Anxiety

For example, it’s estimated that approximately 30 percent of the adult population in North America experiences anxiety unwellness issues (anxiety disorder). Of that, one third aren’t diagnosed, are misdiagnosed, or don’t come forward about their anxiety issues. 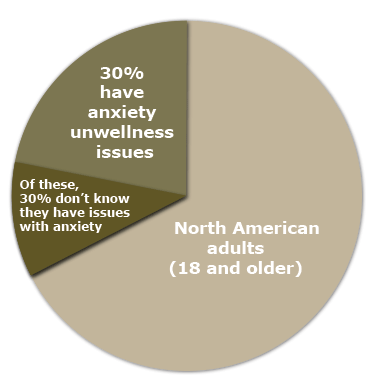 This means that 10 percent of the overall adult population in North America don’t know they have issues with anxiety.

Anxietycentre.com members and therapy clients often tell us they struggled with problematic anxiety and its symptoms for years but didn’t know anxiety was the cause. We’ve also had many people tell us that the first they became aware of their problem with anxiety was when they took one of our anxiety tests.

Yet others have said they just thought their unwellness was caused because ‘that’s just how they were wired’ or because they were ‘born that way.’

Yet others said they just thought ‘everyone behaved and felt this way.’

We’ve also worked with a lot of people in their 60s and above that wished they would have known anxiety was the cause of their unwellness so that they could have addressed it years ago.

There are many other examples, as well.

The first barrier to recovery is being unaware that anxiety is the cause of your unwellness issues and/or symptoms.

This barrier can be eliminated by discussing your unwellness feelings and/or symptoms with your doctor and mental health professional. Checking your symptoms online and doing some anxiety-related self quizzes can also alert you to the potential that issues with anxiety is causing or contributing to feeling poorly.

If you have identified problematic anxiety as being a cause of your unwellness, the next step is seeking good self-help information so you have a better understanding of what you are dealing with. As you become more familiar with anxiety, the final step in overcoming anxiety unwellness issues is to work with an experienced anxiety disorder therapist, coach, or counselor. As you work to address your anxiety issues, you can resolve them and return to a life free from problematic anxiety and its consequences.

Problematic anxiety can be completely overcome with the right information, help, and support. No one needs to suffer needlessly.

Take one of our anxiety tests to see if you are experiencing issues with anxiety:

anxietycentre.com: Information, support, and coaching/counseling/therapy for problematic anxiety and its sensations and symptoms, including common barriers to overcoming anxiety disorder: unawareness.