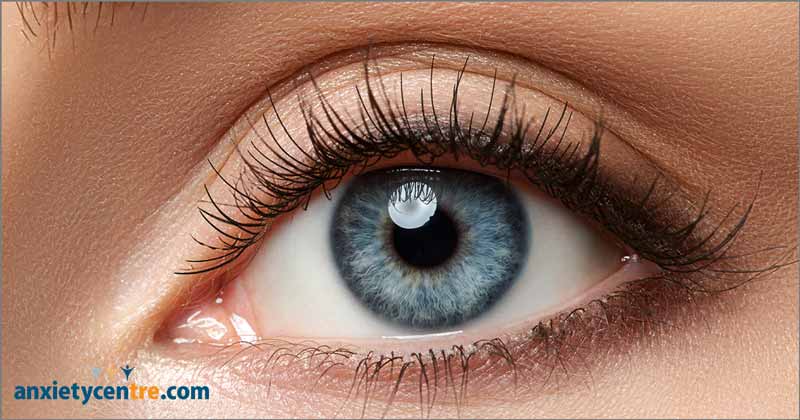 Eye floaters, such as spots, specks, squiggly lines, strings, cobwebs, and other things that interfere with your vision are common eye symptoms, including signs of anxiety disorder.

This article explains the link between floaters and anxiety. 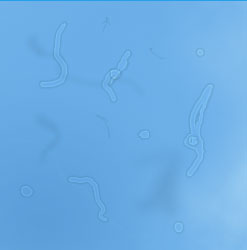 Eye floaters can be in one eye only, and can be in both eyes.

Eye floaters can also appear and seemingly disappear, only to reappear again later.

Eye floaters can be very visible and fade away over time.

Eye floaters can range in intensity from barely noticeable to very visible.

The prevalence of eye floaters can change from day to day, moment to moment, or remain as a constant background to your struggle with anxiety disorder.

As we age, the jelly-like substance (vitreous) inside the eye becomes more fluid. As it becomes more fluid, microscopic fibers can clump together and cast small shadows on the eye's light-sensitive part (retina). These clumps are referred to as "floaters."[1][2]

While we aren't seeing the actual floaters, we see the shadows they cast on the retina as specks, strands, webs, or other shapes that interfere with vision.

Because floaters are inside your eye, they move with your eye when you want to try to see them.

While distracting, floaters aren’t harmful or serious. They aren’t a cause for concern.

Yes, they can scare you when you first notice them, but that’s generally because we imagine the worst about them. 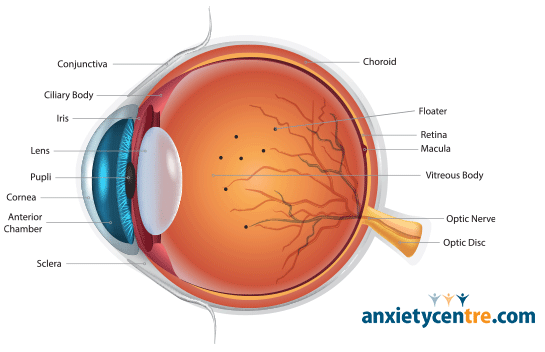 Again, floaters are very common and not a cause for concern.

Most people get floaters. They commonly occur as we age.

We’ve also noticed that chronic stress can cause a greater incidence of floaters. Many people have commented that they noticed their floaters shortly after a sustained period of stress. I (Jim Folk) noticed this myself when my floaters first appeared.

While research hasn’t shown why stress can cause an increase in floaters, it has shown there is a link.[3]

Floaters typically fade over time and become less bothersome. Tilting your head back and moving your eyes quickly back and forth can also help move them out of your vision if they are distracting or interfering with your vision.

Once again, while floaters can be distracting, they are harmless. Most people have them.

How to get rid of eye floaters

There isn’t anything you can do to eliminate floaters once they appear. They fade in time.

You might be able to prevent the onset of floaters by keeping your stress within a health range. You can do that by practicing your physiological recovery strategies and addressing your underlying factors so that they aren’t contributing to a unhealthy buildup of stress.

Again, eye floaters are harmless and needn’t be a cause for concern. Most people get them.

Even though there aren’t many ways to reduce floaters once they appear, some of the following strategies have proven helpful for some people.

Since each person is somewhat physically and chemically unique, what might work for one person might not for another. However, some people have found the following tips helpful in reducing and preventing floaters:

NOTE: If you notice a sudden appearance of many floaters, especially if they are accompanied by flashes of light or other vision disturbances, you should see your doctor right away. It could indicate a retinal detachment or other problem in the eye.

Does anxiety cause eye floaters?

Anxiety doesn’t cause floaters directly, but the stress from anxious behavior can increase floaters for some people. Stress has been linked to an increase in floaters. However, the cause is currently unknown.

Can eye floaters cause anxiety?

What’s the best way to deal with floaters?

The best way to deal with floaters once you have them is to ignore them, knowing they aren’t harmful and will dissipate over time.

If they interfere with your vision, moving your eyes back and forth while giving your head a gentle shake can move them out of your vision.

Are floaters an indication of a serious medical condition?

Can floaters lead to serious eye disease or vision problems?

Generally, no. Floaters themselves are harmless. The worst they can do is interfere with your vision.

Can floaters cause you to go blind?

No. Floaters are at most, an annoyance.

How to overcome a fear of floaters?

Since floaters are common for most people, and aren’t harmful, there is no reason to be afraid of them. They don’t cause any harm and don’t lead to any harm.

So again, since they pose no threat, there’s no reason to worry about them.

Why am I noticing my floaters more?

Research has shown that anxious people tend to notice their floaters more, and they are bothered by them more than people who aren’t anxious.

You could be noticing your floaters more now because they have increased in prevalence due to the stress coming from anxious behavior, or because you have a health and medical sensitivity.

It’s best to discuss eye floaters with your doctor, especially if you see a sudden increase in them, which could signal a serious eye condition requiring immediate attention.

Eye floaters generally don’t completely dissolve, but they can become less visible over time as they sink into the vitreous and settle at the bottom of the eye.

The brain can also ignore them over time so they won’t be as bothersome as when they first appear.

Floaters are generally a sign of aging and stress. In this regard, they are harmless and needn’t be a cause for concern.

However, a sudden increase in floaters, especially when accompanied by flashes, could be a sign of a serious eye condition that requires immediate attention.

How long does it take for eye floaters to go away?

There is no set time for when floaters disappear. Some can diminish quickly, as in a few days or weeks, whereas others might linger for months.

And, because each eye can age at different rates, floaters in one eye might diminish sooner than floaters in the other eye.

No matter the time frame, floaters typically aren’t harmful, so there is no reason to be concerned about them.

Can floaters be caused by stress?

There is research indicating that stress can be an indirect cause of floaters.[3] Stress is thought to put extra strain and pressure on the eyes, affecting the vitreous in the eye, causing floaters.

However, there is substantive anecdotal evidence suggesting stress can significantly increase the incidences of floaters. I've had numerous instances where an increase in floaters occurred shortly after a stressful period.

Many of our Recovery Support members and therapy clients have reported similar instances.

Can dehydration cause eye floaters?

Furthermore, dehydration stresses the body, and stress has been linked to an increase in floaters.

How do you fix eye floaters?

In most cases, harmless eye floaters disappear on their own over time. There is nothing else that is required. If you are bothered by eye floaters, talk with your doctor or optometrist for other options.

How to prevent eye floaters?

While you can’t prevent age-related eye floaters, you can minimize floaters caused by stress and aspects that stress the body.

For instance, adopting healthy stress management practices, getting regular good sleep, eating a healthy diet, keeping the body well hydrated, getting regular exercise, avoiding stimulants, and addressing your anxious behavior can all help in reducing the incidences of floaters.

If you are having trouble overcoming your anxiety issues, such as what can seem like out of control worry, connecting with one of our recommended anxiety disorder therapists can help you eliminate issues with anxiety and the stress coming from that anxiety.

anxietycentre.com: Information, support, and therapy for anxiety disorder and its symptoms, including Eye Floaters And Anxiety.

2. Skerrett, Patrick. "What you can do about floaters and flashes in the eye." Harvard Health Publishing, 10 June 2013, https://www.health.harvard.edu/blog/what-you-can-do-about-floaters-and-flashes-in-the-eye-201306106336