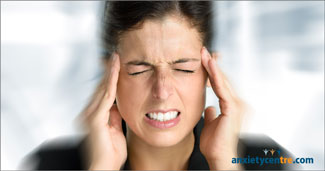 This article explains the relationship between anxiety and feeling dizzy.

Dizziness anxiety lightheaded symptoms or "spells" can come and go suddenly, come and linger, or can come and remain persistently.

Dizziness anxiety lightheaded feelings can precede, accompany, or follow an episode of nervousness, anxiety, fear, and elevated stress, or occur "out of the blue" and for no apparent reason. They can also range in intensity from slight, to moderate, to severe. They can also come in waves, where they are strong one moment and ease off the next.

The anxiety dizziness lightheaded symptoms can change from day to day, and from moment to moment. They can also be strong one week and become significantly less the next.

Sometimes these dizzy spells come on suddenly, then ease off only slightly. At other times, you can feel dizzy or lightheaded suddenly and then it disappears quickly. Dizziness and lightheadedness can also come on strong and then persist for hours or days at a time.

This dizziness anxiety lightheaded feeling is often described as coming in “waves” where dizzy spells come on quickly and strong, and then slowly ease off throughout the day.

Those who experience this symptom persistently can notice increases and decreases in severity associated with "waves" or "episodes" of intensity. Sometimes the intensity can increase for an extended period of time, such as days before the intensity decreases again.

This anxiety dizziness symptom can be more noticeable when undistracted, resting, trying to fall asleep, or when waking up.

All variations and combinations of the above are common.

For some people, episodes of anxiety dizziness and lightheadedness can trigger anxiety, and therefore, be accompanied by an immediate stress response (or panic attack) and its resulting sensations and symptoms, such as nausea, vomiting, sweating, feeling disoriented, rapid heart rate, heart palpitations, having a sudden urge to escape, and so on.

This anxious reaction can occur for many reasons. For example:

Causes relating to anxiety include:

Taking in too much or too little oxygen. Hyper and hypoventilation can change the CO2 level in the blood, which can cause a myriad of anxiety-like symptoms, such as dizziness, lightheadedness, feeling off balance, and feeling like you might pass out.

What is an active stress response[2]

Behaving in an apprehensive manner activates the stress response. The stress response secretes stress hormones into the bloodstream where they bring about specific physiological, psychological, and emotional changes that enhance the body’s ability to deal with a threat - to either fight with or flee from it - which is the reason the stress response is often referred to as the fight or flight response.

A part of the stress response changes include shunting blood to parts of the body vital for survival, such as the brain, and away from those that aren’t, such as the digestive system. To bring about this shunting action, heart rate and respiration are increased.[2] These blood flow changes alone can cause a person to feel dizzy, lightheaded, off balance, and like you might pass out.

Stress impacts the body’s nervous system. Too much stress can cause the nervous system to act in odd ways, which can affect our sense of balance. If you’ve been under a lot of stress lately, that stress could be the cause of your dizzy and lightheaded feelings.

Anticonvulsants, such as Depakote, Neurontin, and Lyrica, which some doctors prescribe for anxiety and depression, can also cause dizziness and lightheadedness.

Many blood pressure and muscle relaxant medications can also cause dizziness and lightheadedness.

Also, taking multiple medications can cause dizziness as a combined side effect.

For more information, talk with your doctor and pharmacist to see if any of the medications you are taking could be causing dizziness or lightheadedness as a side effect.

How to treat dizziness associated with anxiety

If your anxiety dizziness is caused by hyper or hypoventilation, adopting a natural breathing style – relaxed, slower, and deeper – will correct the CO2 level in the blood, which will eliminate ventilation caused dizziness.

If your dizziness is caused by chronic stress (which we call hyperstimulation), reducing your stress and giving your body sufficient time to recover will eliminate this symptom. Keep in mind, however, that it can take a long time for the body to recover once it has become chronically stressed and symptomatic.

If your dizziness is caused by sleep deprivation and fatigue, increasing your sleep, rest, and giving your body sufficient time to regain its normal energy will eliminate fatigue-caused dizziness.

If your dizziness is caused by medication, talk with your doctor about reducing your dosage, switching to a different medication, or stopping altogether, if possible. NEVER stop a medication without first talking with your doctor or pharmacist. Stopping some types of medications abruptly can cause significant harm.

Play the clip below for Jim Folk's commentary about the dizziness anxiety symptoms. Jim Folk is the president of anxietycentre.com.

Dizziness is a common symptom of elevated stress, including the stress anxiety can cause. Jim Folk experienced profound dizziness during his 12 year struggle with anxiety disorder.

Can anxiety dizziness last all day?

Is dizziness from anxiety dangerous?

As a symptom, no, dizziness from anxiety isn’t dangerous. However, you might want to be extra cautious when doing certain activities, such as driving, operating heavy machinery, getting up from a lying or sitting position too quickly, or while using the stairs.

You might also want to avoid turning your head too quickly or being in environments with a lot of motion, such as crowds or where there is heavy traffic.

So again, while anxiety dizziness itself isn’t dangerous, feeling dizzy, lightheaded, and off balance can cause problems when doing certain activities.

Can dizziness cause anxiety?

Anxiety is caused by apprehensive behavior. So, no, dizziness doesn’t cause anxiety. But dizziness can cause involuntary startle, postural reflex, and stress responses that can produce similar symptoms to anxiety. If a person doesn’t like feeling dizzy and becomes afraid of it, she might worry about feeling dizzy, which does create anxiety.

If you have become afraid of the dizziness anxiety symptom, you might want to connect with one of our recommended anxiety disorder therapists to help you overcome this fear. Since fear drives anxiety, and anxiety stresses the body, which is a common cause of anxiety dizziness, overcoming your fear of dizziness can eliminate anxiety-caused dizziness.

For a more detailed explanation about all anxiety symptoms, why symptoms can persist long after the stress response has ended, common barriers to recovery and symptom elimination, and more recovery strategies and tips, we have many chapters that address this information in the Recovery Support area of our website.

NOTE: Anxiety, stress, and hyperstimulation-caused dizziness is often misdiagnosed as vertigo, benign positional vertigo (BPV), Meniere’s Disease, Labrynthitis, and vestibular neuritis. If you’ve tried the treatments associated with each condition, yet your dizziness and lightheadedness persist, your dizziness and lightheadedness may be caused by stress, including anxiety-caused stress. Therefore, you may want to seek out a medical professional who understands the connection between dizziness/lightheadedness and stress. For instance, it’s reported that psychiatric disorders appear to be the second most common cause of chronic dizziness.[10]

anxietycentre.com: Information, support, and professional therapy for problematic anxiety and its symptoms, including anxiety dizziness.

10. Pederson, Traci. “Chronic Dizziness May Be Tied to Psychiatric Disorder.” Psych Central, 1 May 2018.