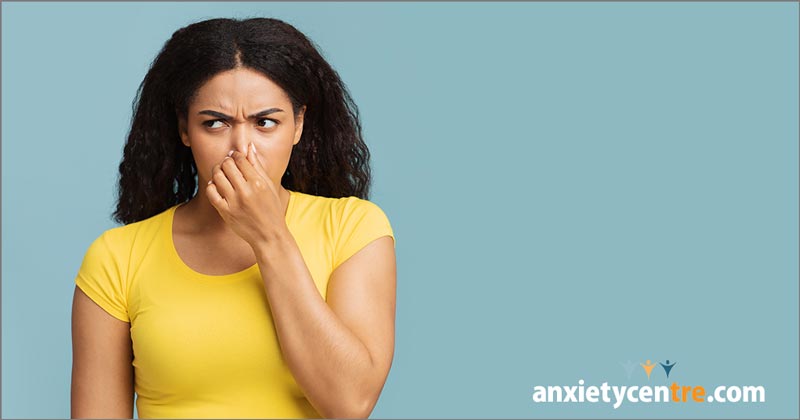 Many anxious people report having phantom and odd smells as an anxiety symptom.

This article explains the relationship between anxiety and phantom and odd smells.

This odd smell can occur rarely, frequently, or persistently. For example, you have a bad smell once in a while and not that often, have it off and on, or have it all the time.

This odd smell can precede, accompany, or follow an escalation of other anxiety symptoms or occur by itself.

This phantom smell can precede, accompany, or follow an episode of nervousness, anxiety, fear, and stress, or occur “out of the blue” and for no apparent reason.

Phantom smells can range in intensity from slight, to moderate, to severe. They can also come in waves where they are strong one moment and ease off the next.

Phantom smells can change from day to day and from moment to moment.

All the above combinations and variations are common.

When phantom smells are caused by stress, including anxiety-caused stress, there can be many reasons why it occurs, including:

Anxious behavior, such as worry, activates the stress response, causing many body-wide changes that prepare the body for emergency action – to either fight or flee.[1][2]

Visit our “Stress Response” article for more information about its many changes.

Part of the stress response changes include slowing saliva production and heightening the body’s senses, including the chemosensory system that includes the sense of smell. The body does this so that we are more able to quickly detect a threat should one be present. These changes are beneficial when in real danger. 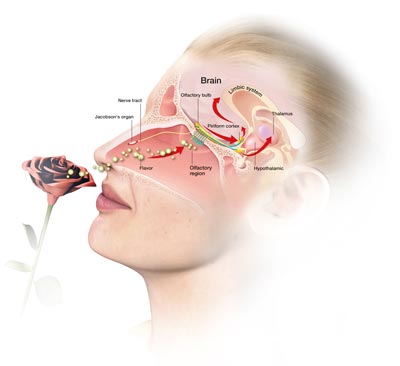 Since smells come from two pathways – the nostrils, and a channel that connects the roof of the throat to the nose – reduced saliva and an altered sense of smell can cause odd and phantom smells when the stress response is active.

Moreover, research has found that stress can modulate sweet and salt thresholds,[3][4] such as via the endocannabinoid system (which plays an important role in appetite and taste),[5] creating odd tastes and smells.

The higher the degree of the stress response, the more dramatic the changes.

Many anxious people notice odd smells when a stress response has been activated.

An active stress response is a common cause of odd smells.

However, the body can't completely recover when stress responses occur too frequently, such as from overly apprehensive behavior.

Incomplete recovery can leave the body in a state of semi-stress response readiness, which we call “stress-response hyperstimulation” since stress hormones are powerful stimulants.

Visit our “Hyperstimulation” article for more information about the many ways hyperstimulation can affect the body and how we feel.

Having phantom smells is a common indication of hyperstimulation (chronic stress) and how it can affect olfactory processing.

3. A reduction in saliva can cause harmful bacteria to flourish in the mouth, causing odd smells in the nose

A chronic reduction in saliva can allow harmful bacteria to build up in the mouth. The buildup of harmful bacteria can alter the flora in your mouth, which can lead to having a bad tastes and smells from the growth of bacteria.

4. The stress response affects the stomach and digestive system

When the body becomes hyperstimulated due to the chronic activation of the stress response, such as from overly apprehensive behavior, we can experience many stomach and digestive system problems. These problems can cause gas, bloating, stomach upset, and fermenting food, which can affect the taste in the mouth and smells in the nose.

The stress response also suppresses the body’s immune system.[8] While short-term immune system suppression isn’t harmful, chronic suppression, such as that caused by hyperstimulation, can allow intruders to take hold.

Sinus infections can cause bad, unusual, and phantom smells in the nose.

7. Hyperstimulation can cause an increase in Candida.

Candida albicans is a pathogenic yeast that is a natural microflora found in the GI tract, mouth, and vagina. Most of the time, it causes no issues.[11]

However, stress, which suppresses the immune system and causes an increase in blood sugar, can cause Candida to flourish. An overgrowth of Candida in the mouth can cause a bad taste and odd smells.

Any one or combination of stress and anxiety factors, can cause phantom smells, which can be intermittent or persist for as long as the body is hyperstimulated.

8. Side effect of anti-anxiety and antidepressant medications, especially when withdrawing.

Many medications, including anti-anxiety and antidepressants, can cause phantom smells as a side effect,[12] especially when withdrawing.

Phantom smells can also be a side effect of other mood-altering and gastric medications.

Other factors can create stress and cause anxiety-like symptoms, as well as aggravate existing anxiety symptoms, including:

When this symptom is caused or aggravated by other factors, addressing those factors can reduce and eliminate it.

Keep in mind it can take up to 20 minutes or more for the body to recover from a major stress response. But this is normal and shouldn’t be a cause for concern.

You can eliminate hyperstimulation by:

However, eliminating hyperstimulation can take much longer than most people think, causing symptoms to linger longer than expected.

As long as the body is even slightly hyperstimulated, it can present symptoms of any type, number, intensity, duration, frequency, and at any time, including this one.

Even so, since phantom smells anxiety symptoms are a common symptom of stress, including anxiety-caused stress, it's harmless and needn't be a cause for concern. It will subside when unhealthy stress has been eliminated and the body has had sufficient time to recover and stabilize. Therefore, there is no reason to worry about it.

Addressing the reason for lingering symptoms will allow the body to recover.

Most often, lingering anxiety symptoms ONLY remain because of the above reasons. They AREN'T a sign of a medical problem. This is especially true if you have had your symptoms evaluated by your doctor, and they have been solely attributed to anxiety or stress.

Since worrying and becoming upset about anxiety symptoms stress the body, these behaviors can interfere with recovery.

Passively accepting your symptoms – allowing them to persist without reacting to, resisting, worrying about, or fighting them – while doing your recovery work will cause their cessation in time.

Acceptance, practice, and patience are key to recovery.

Since the body can take a long time to recover from hyperstimulation, it's best to faithfully work at your recovery despite the lack of apparent progress.

However, if you persevere with your recovery work, you will succeed.

Remember: Focusing on your sensations and symptoms makes them more pronounced. If you'd like to lessen their impact, learn to focus your attention elsewhere through distraction, enjoying your hobbies, undertaking pleasing and calming activities, regular deep relaxation, and by recalling pleasant memories or experiences.

When you do the right work, the body HAS TO recover. As the body recovers, it stops sending symptoms of hyperstimulation, including phantom smells.

Unidentified and unaddressed underlying factors cause issues with anxiety. As such, they are the primary reason why anxiety symptoms persist.[13][14][15]

Addressing your underlying factors (Level Two recovery) is most important if you want lasting success.

If you want to achieve lasting success over anxiety disorder, any one of our recommended therapists would be a good choice.

Working with an experienced anxiety disorder therapist is the most effective way to treat anxiety disorder, especially if you have persistent symptoms and difficulty containing anxious behavior, such as worry.

In many cases, working with an experienced therapist is the only way to overcome stubborn anxiety.

In an online poll we conducted, 46 percent of respondents said they had phantom smells as an anxiety symptom.

If this symptom is caused by stomach and digestive system problems that don’t resolve through stress reduction, you may want to talk with your doctor and a Nutrition Science Practitioner for more information.

If this symptom is caused by a persistent sinus infection, you should talk with your doctor and find ways to boost your immune system.

If this symptom is caused by an overgrowth of Candida, you may want to talk with a Nutrition Science Practitioner for natural ways to reduce Candida.

Can anxiety cause phantom and odd smells?

No, anxiety-caused phantom smells are not serious because this symptom is just another symptom of anxiety and chronic stress (hyperstimulation). It will subside when you address your anxiety and stress issues. I (Jim Folk) have not had it since I recovered in 1986.

Should I be worried about anxiety phantom smells symptoms?

No, there is no reason to be worried about the anxiety symptom phantom smells. It will subside when you address your anxiety and chronic stress issues.

However, worry, an apprehensive behavior that creates anxiety and stress, can prolong phantom smells. So, there is a good reason not to worry about it. But, as long as the body is chronically stressed, it can exhibit symptoms, including phantom smells.

That said, since many medical conditions and medications can cause phantom smells as a side effect, especially when withdrawing from a medication, we recommend discussing all new, changing, persistent, and returning symptoms with your doctor to ensure it is solely anxiety-related. If it is solely anxiety related, there is no reason to worry about it.

anxietycentre.com: Information, support, and therapy for anxiety disorder and its symptoms, including phantom and odd smells anxiety symptoms.

15. DISCLAIMER: Because each body is somewhat chemically unique, and because each person will have a unique mix of symptoms and underlying factors, recovery results may vary. Variances can occur for many reasons, including due to the severity of the condition, the ability of the person to apply the recovery concepts, and the commitment to making behavioral change.

Your knowledge in nutrition and health is priceless to anybody. Not just to anxiety clients, but to all people who appreciate life and the quality of a healthy life. Thank you from the bottom of my heart!
Larissa, USA