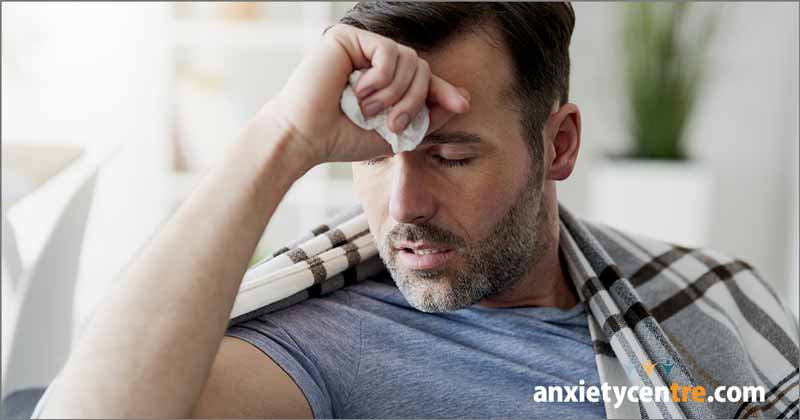 To see if anxiety might be playing a role in your anxiety symptoms, rate your level of anxiety using our free one-minute instant results Anxiety Test, Anxiety Disorder Test, and Hyperstimulation Test.

The higher the rating, the more likely anxiety could be contributing to your symptoms, including feeling ill and sick without being medically sick.

This article explains the relationship between anxiety and the feel ill and sick anxiety symptom.

Common descriptions for the anxiety symptom feel ill and sick:

This feel ill and sick symptom can precede, accompany, or follow an escalation of other anxiety sensations and symptoms or occur by itself.

This feel ill and sick symptom can precede, accompany, or follow an episode of nervousness, anxiety, fear, and elevated stress, or occur “out of the blue” and for no apparent reason.

This feel ill and sick symptom can range in intensity from slight, to moderate, to severe. It can also come in waves where it’s strong one moment and eases off the next.

This feel ill symptom can change from day to day, moment to moment, or remain as a constant background to your struggle with anxiety disorder.

It’s common for this feel ill and sick symptom to come on suddenly and for no apparent reason.

It's also common for this symptom to disappear after resting, a nap, or a good sleep.

It’s also common to experience a feeling sick and ill episode and then feel fine a little while later.

Feeling ill and sick can seem more disconcerting when undistracted, resting, doing deep relaxation, or when trying to go to sleep or when waking up.

Why does anxiety make you feel ill and sick yet can’t describe how you feel.

There are many reasons why anxiety can make you feel ill and sick even though you don’t have the flu or a medical condition causing it. Here are several reasons why:

For instance, anxious behavior activates the stress response, causing body-wide changes that give the body an emergency “boost” of energy when we believe we could be in danger.

Visit our “Stress response” article for more information about the many changes and how they affect the body.

Some of these changes include:

Many of these stress response changes can make a person feel ill, such as muscle aches and pains, lightheadedness, queasy stomach, hot and cold sweats, and a general malaise feeling.

Often, the sick feeling isn’t related to any one symptom, but an overall feeling like there is something physically or medically wrong that you can’t describe or put your finger on.

While important for survival, stress response changes can make the body feel ill, especially when the stress responses are in the moderate to high degree range.

However, when stress responses occur too frequently, such as from overly apprehensive behavior, the body can’t complete recovery.

Incomplete recovery can create a state of semi stress response readiness, which we call “stress-response hyperstimulation” since stress hormones are stimulants.

As long as the body is hyperstimulated, it can produce symptoms of any type, number, intensity, duration, frequency, and at any time, including making you feel like you are sick.

Homoeostasis is the term used to describe the ongoing, automatic process[5] of regulating and maintaining the body’s internal balance, despite the ever-changing conditions.

When the body is healthy, homeostasis does a good job of keeping the body working smoothly. However, hyperstimulation can create a state of dyshomeostasis or cocastasis,[6][7] which we call Homeostatic Dysregulation.

Homeostatic dysregulation can cause regulatory problems, resulting in erratic swings in feelings, sensations, and symptoms, and for no apparent reason.

As long as the body is hyperstimulated, it can cause problems with homeostasis. Many “out of the blue” anxiety symptoms are caused by hyperstimulation-caused homeostatic dysregulation.

Homeostatic dysregulation is a common cause of feeling ill when you aren’t medically sick.

Just as hyperstimulation can cause problems with homeostasis, it can also cause nervous system irregularities.

These irregularities can cause many sensory, muscle movement, and system problems, which can cause a feeling like you are sick even though you aren’t medically ill.

Recovery Support members can read more about this in chapters 3, 14, and 18.

Stress responses, which stress the body, can drain the body’s energy resources quickly due to the rapid mobilization of energy.[2]

When the body is chronically stressed, such as from overly apprehensive behavior, it can fatigue quickly.

Fatigue is a common cause of feeling ill even though there isn’t a medical illness.

As stress increases, the body’s ability to fend off intruders, such as flu bugs (viruses) and infection (bacteria), diminishes.

As long as stress remains elevated, the body can struggle with health issues. These health issues can cause a person to feel ill, sick, or sickly, even though the person doesn’t have full-blown flu.

Chronic stress hampers the body’s ability to keep itself healthy. Therefore, it can cause persistent symptoms, including those that make a person feel ill.

I (Jim Folk) had this symptom, too, and a lot when I struggled with anxiety disorder. I know how unsettling it can be.

But this symptom isn’t harmful and isn’t an indication of a real medical problem. Therefore, it needn’t be a cause for concern.

Associated with anxiety, there are other factors that can cause and contribute to this symptom, including:

How to get rid of the anxiety symptom feeling ill or sick?

When feeling ill and sick symptoms are caused by other factors, addressing the cause should alleviate the symptoms.

Keep in mind, it can take up to 20 minutes or more for the body to recover from a major stress response. This is normal and shouldn’t be a cause for concern.

When feel ill and sick anxiety symptoms are caused by hyperstimulation, such as from overly apprehensive behavior, it can take much longer for the body to recover, and to the point where this anxiety symptom subsides.

Furthermore, it’s common for hyperstimulation to cause multiple types of feeling sick, such as upset stomach, aches and pains, muscle tension, dizziness, nausea, feeling cold and chilled, hot flashes, fatigue, and diarrhea, to name a few.

Nevertheless, when the body has recovered from hyperstimulation, the feel ill and sick anxiety symptom will subside.

Therefore, again, anxiety feeling sick or ill symptoms needn’t be a cause for concern.

The Recovery Support area has more information about how to get rid of anxiety symptoms, including feeling ill and sick.

The Recovery Support area of our website has a great deal of in-depth self-help information.

We explain important recovery concepts in the Recovery Support area, such as:

You can sign up for a Recovery Support membership by clicking on the icon below.

If you are having difficulty with anxiety, what seems like uncontrollable worry, fearing or eliminating your anxiety symptoms, or fears that seem to be controlling your life, we recommend connecting with one of our recommended anxiety disorder therapists.

Working with an experienced anxiety disorder therapist is the most effective way to overcome issues with anxiety, hyperstimulation, and their symptoms.[8][9][10][11][12]

anxietycentre.com: Information, support, and therapy for anxiety disorder and its symptoms, including feel ill and sick anxiety symptoms.