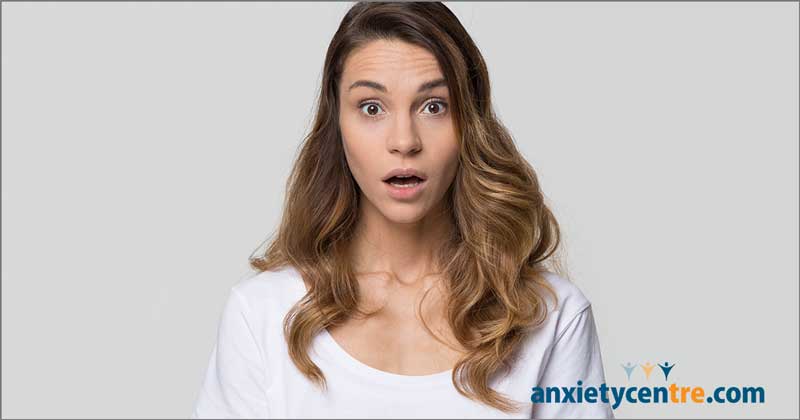 Dissociation – feeling detached from yourself, like in a dreamlike state, feeling weird or off-kilter, and like everything is surreal – is a common anxiety disorder symptom experienced by many people who are anxious.

This article explains the relationship between anxiety and dissociation, its causes, and what you can do to stop this feeling.

Dissociation might proceed, accompany, or follow an escalation of other anxiety sensations and symptoms or occur by itself.

Dissociation can precede, accompany, or follow an episode of nervousness, anxiety, fear, and stress, or occur "out of the blue" due to a sudden trauma.

Dissociation can range in intensity from slight, to moderate, to severe. It can also come in waves where it’s strong one moment and disappears the next.

This symptom can change from day to day and from moment to moment.

All the above combinations and variations are common.[1]

Dissociation can seem more disconcerting when undistracted, resting, doing deep relaxation, trying to go to sleep, or when waking up.

First, the amygdala is often referred to as the “fear center” of the brain because it appears to be central to the detection and reaction to a threat, even though other parts of the brain are involved with the reaction to danger.

Second, the amygdala, which is a part of the limbic system (the system primarily responsible for emotion responsiveness), is also often referred to as the “emotional processing core” of the brain, even though other parts of the brain are involved with and react to our emotions.

And third, even though the amygdala is mostly referred to as a single part of the brain, there are two amygdalae – a right amygdala and a left amygdala. While they perform together, they perform different functions. For example:

For simplicity's sake, Marie refers to these twins as the amygdala sisters. The symptom dissociation occurs because of how AMY and MEG interact under certain situations.

For example, the moment we believe we could be in danger, AMY detects the fear message and signals the appropriate system to take action. The degree of perceived danger determines which system responds and the degree of stress response: first degree or second degree stress response. For more information about the two systems and degrees of stress responses, see the “Hyperstimulation” article.

However, it the person believes he is in grave danger, the body can produce a high degree stress response with the effects being profound and unmistakeable. In some instances, the stress response changes can be so dramatic that they affect behavior.

We often hear of people saying they were so afraid that they felt like they were paralyzed like a “deer in caught in headlights.” So, high degree fears can produce high degree reactions, including feeling “paralyzed with fear.” This is the reason some people refer to the survival mechanism as the “fight, flight, or freeze” system.

Dissociation is most often associated with high degree fears, such as when experiencing great trauma that makes you feel paralyzed. Here’s why:

When we feel threatened, the right amygdala (AMY) springs into action by signalling the HPA axis (hypothalamic–pituitary–adrenal axis), which in turn triggers the stress response – the body’s way of supercharging itself into immediate action. This reaction is beneficial when in real danger.

When we feel sad or helpless, the left amygdala (MEG) springs into action by signalling the body to produce natural opiates (opioids) in an attempt to numb us from what we are feeling. Opioids suppress the nervous system, creating pain relief and a euphoric feeling. Morphine, methadone, and codeine are opioid drugs that recreate this feeling.

This effect can be illustrated as:

The more threatened and helpless we feel, the more dramatic the reaction (the greater the combination of stress hormones and opiates).

Moreover, as our perception of danger increases, the right amygdala becomes more active, suppressing activity in the cortex (the rationalization areas of the brain). And as our perception of sadness and helplessness increases, the left amygdala becomes more active, also suppressing the activity in the cortex.

As the notions of fear and helplessness increase, we spend more time activating the limbic system and less time thinking rationally. Again, this combination can cause feelings of dissociation.

Here are some examples of how dissociation can set up:

Catastrophizing over emphasizes worst case scenarios, making them seem like insurmountable and catastrophic issues: Consequently, the threat becomes massive, and you start thinking about it more and more. This rumination can block you from taking action. This blocking action can:

Feeling helpless - believing the situation, circumstance, or event is going to impact all areas of your life and that you have no control over it: Consequently, you might conclude that the bad things are here to stay.

For those who struggle with anxiety issues, they might also believe that anxiety is something they’ll never be able to get rid of. As a result, they conclude there is nothing they can do about it and it’s going to ruin every aspect of their lives. Feeling helpless can cause:

We create anxiety when we catastrophize (imagine worst case outcomes that seem threatening). We create the feelings of helplessness when we feel like there is nothing we can do about our situation.

Other factors can cause and contribute to this symptom, including:

NOTE: Dissociation can create symptoms similar to anxiety and low blood sugar. If you are feeling faint, dissociated, weak, numb, shaky, etc., yet your blood sugar is well within the normal range, these symptoms could be caused by dissociation rather than blood sugar related.

When dissociation is caused or aggravated by other factors, addressing those factors can reduce and eliminate it.

If you’ve determined your dissociation is caused by anxiety or helplessness, containing your anxiety/helplessness behavior will eventually quiet down the amygdalae. As their activity diminishes, you should see the dissociation feeling subside…in time.

Faithfully practicing your recovery strategies, containing anxious/helplessness behavior, addressing the underlying factors of your anxiety so that your body can recover, and giving your body ample time to recover will reverse anxiety/helplessness-caused dissociation.

Containing worrisome behavior will shift brain activity to the cortex and away from the Limbic System. As the cortex regains its normal activity, you should see anxiety/helplessness-caused dissociation subside.

Passively accepting this symptom in the short-term—allowing it to persist without reacting to it, resisting it, worrying about it, or fighting it—while faithfully practicing your recovery strategies will bring about success.

Acceptance, practice, and patience are keys to recovery. The more successful you are with these strategies, the more opportunity your body will have to recover.

Dissociation is a common symptom of anxiety and feeling helpless. Like other symptoms of stress, it needn't be a cause for concern.

Faithfully applying the above-mentioned strategies will bring an end to this symptom in time. For some people, the symptom will subside quickly. For others, especially those whose level of hyperstimulation is elevated into the high and very high degree ranges, it may take more time to eliminate this symptom.

In an online poll we conducted, 31 percent of respondents said they experienced this symptom because of their struggle with anxiety.

anxietycentre.com: Information, support, and therapy for anxiety disorder and its symptoms, including dissociation anxiety symptoms.

1. Şar, Vedat. “The Many Faces of Dissociation: Opportunities for Innovative Research in Psychiatry.” Clinical Psychopharmacology and Neuroscience, Korean College of Neuropsychopharmacology, Dec. 2014.

I can honestly say I have come to a place where my anxiety is for all intents and purposes "resolved."
Damian S., Australia