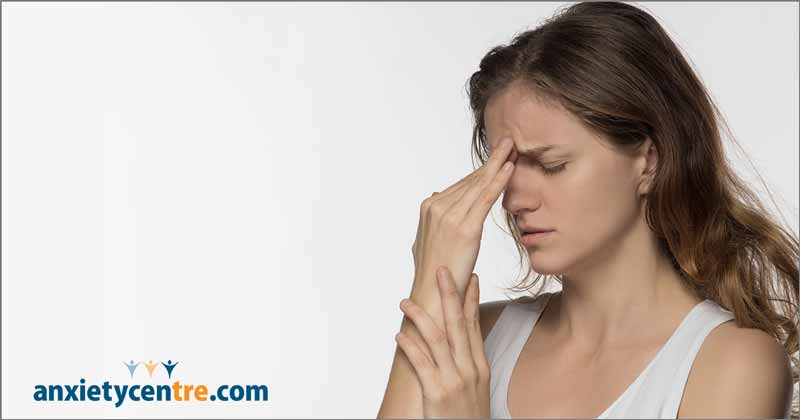 This article explains the relationship between anxiety and brain surges.

This symptom can occur occasionally or frequently. It can also occur as a result of a stress response, or all by itself.

Brain surges can precede, accompany, or follow an escalation of other anxiety sensations and symptoms, or occur by itself.

The brain surges anxiety symptoms can precede, accompany, or follow an episode of nervousness, anxiety, fear, and elevated stress, or occur "out of the blue" and for no apparent reason.

This symptom can also range in intensity from slight, to moderate, to severe. It can also come in waves, where it’s strong one moment and eases off the next.

Brain surges can change from day to day and from moment to moment.

This “brain surge” feeling can occur at any time of day or night.

The higher the rating, the more likely it could be contributing to your anxiety symptoms, including brain surges symptoms.

Why Does Anxiety Cause Brain Surge Symptoms?

The moment we believe we could be in danger, the body secretes stress hormones into the bloodstream where they travel to targeted spots to bring about specific physiological, psychological, and emotional changes that enhance the body’s ability to deal with a threat – to either fight or flee. This survival reaction is the reason why the stress response is often referred to as the fight or flight response, the emergency response, or the fight, flight, or freeze response (some people freeze when they are afraid like a “deer caught in headlights”).[1][2]

The stress response causes many changes, includes shunting blood away from non-vital organs (stomach and digestive system, etc.) and to vital organs, which includes the brain. This shunting action can cause a sudden “surge” of blood to the brain, which can be felt as a “brain surge” symptom.

The stress response also affects neurotransmitter levels and electrical activity in parts of the brain. This change can be experienced as a “brain surge.”

Furthermore, stress hormones stimulate the nervous system, which includes the brain. Nervous system stimulation can feel like a surge that happens in the brain.

Any one or combination of the above stress response actions can cause a “brain surge” feeling.

The number one reason why anxiety disorder and its symptoms persist is because of unidentified and unaddressed underlying factors that cause issues with anxiety. This is why dealing with your anxiety issues is the most important work overall if you desire lasting success.

Since the majority of stress comes from behavior (the ways we think and act), addressing the core reasons for anxiety disorder can reduce and eliminate the unhealthy stress that often leads to hyperstimulation and symptoms, including this one.

Rebounds of symptoms and a return to a struggle with anxiety are caused for this very reason: the core issues that cause problematic anxiety haven’t been successfully addressed.

Moreover, getting therapy via teletherapy, distanced therapy, or e-therapy (telephone or online therapy) is as effective, if not more so, than in-person therapy.[8][9]

Research has also shown that self-help information can also be beneficial.[10][11] For a more detailed explanation about anxiety symptoms including this one, why symptoms can persist long after the stress response has ended, common barriers to recovery and symptom elimination, and more recovery strategies and tips, we have many chapters that address this information in the Recovery Support area of our website.

anxietycentre.com: Information, support, and therapy for anxiety disorder and its symptoms, including brain surges anxiety symptoms.

I wouldn’t be as far along in my recovery if it wasn’t for Liliana and the Anxietycentre. Thank you from the bottom of my heart!
J.M., USA